Sudden explosion in meals-for-one predicted (by no one)

A collaboration between universities in Tokyo and Atlanta has spawned a device for harvesting power leaked from domestic microwave ovens – turning wasted waves into free energy.

Microwaves pump out energy in the 2.4GHz band: the industrial, scientific and medical (ISM) radio space popularised by Wi-Fi and Bluetooth. The casing of the oven contains almost all the energy used to heat the "meal for one", but some escapes to interfere with nearby wireless networks and that's the energy scooped up by the boffins and their new circuit.

The electronics in their microwave "rectenna" consists of an antenna, a diode and a capacitor, we're told. The incoming waves induce a tiny voltage across the antenna's terminals; the other components rectify and step up the voltage to a mighty 1.8V, enough for most gadgets. 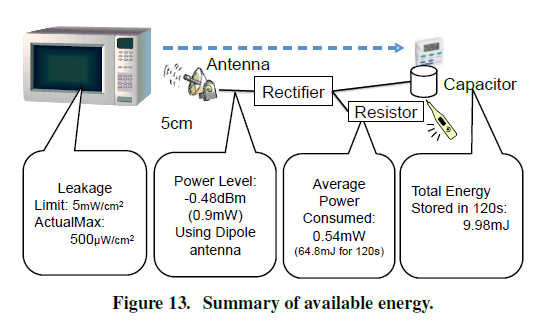 Harnessing microwaves ... how the tech works

Domestic microwave ovens are governed by regulations that restrict their leakage to five milliwatts per square centimetre, at a distance of five centimetres, as New Scientist explains. The researchers discovered leakage was well below that across the brands they tested, but were able to harvest a good proportion of that power to run kitchen appliances including a thermometer and countdown timer.

Equally interesting, to this correspondent at least, was the range of frequencies in which the tested ovens operated. According to the published study [PDF, readable up to page five] an oven from Sharp will blank out Wi-Fi in channel 7, while one from Whirlpool will only affect wireless networks in the top few slots (10 & 11), which could matter to some.

But the point of the project was to see if useful energy could be extracted from the stray radiation, and the conclusion was that it could. A low-power device could run happily on the harvested power, and a wireless sensor could be charged to run for hours from a two-minute burst of microwaves, all from energy that would otherwise be wasted.

It's not the first attempt to harvest energy from radio, as Yoshihiro Kawahara and his fellow boffins note. We've reported on energy harvested from TV signals and RFID transmissions, but those have side effects or use deliberately generated signals, while the leaks from a microwave oven are literally wasted without intervention.

How useful it is to harvest them is debatable: the energy is only there when the microwave is in use, and while most homes might indeed have a microwave oven, it may not be in use all that often, but practicability isn't what this kind of research is about. The question is "how"; "why" comes later. ®