Apple iOS 7 makes some users literally SICK. As in puking, not upset

'Eye candy really is as bad as classical candy is for the teeth,' writes one

Forging new frontiers in fanboi fragility, some members of the iDevice community have taken to Apple's discussion forum to complain that iOS 7 makes them want to puke.

No, their nausea isn't being caused by mere aesthetic revulsion. Rather, the source is iOS 7's many zoom animations along with the slight parallax effect that iOS 7 uses to create the illusion of 3D display layers – home-screen backgrounds, for example, can be seen to shift slightly behind icons as a user rotates their phone.

These bits of UI trickery make some people sick.

"The zoom animations everywhere on the new iOS 7 are literally making me nauseous and giving me a headache. It's exactly how I used to get car sick if I tried to read in the car," wrote the initial poster in an Apple forum entitled "Any way to turn off iOS 7 navigation animations?"

"I have the same problem," writes another. "After using it for two minutes, I felt nauseous."

A third: "I have the same problem. It hurts my eyes and makes me dizzy. So annoying that we can't downgrade!!!! Really unhappy with Apple on this one :-("

A fourth: "I thought I was going crazy today after I updated my phone and I noticed I was feeling queasy every time I used it. Now I see I am not alone! I just used my phone for about 20 minutes and now I feel like I'm going to vomit." 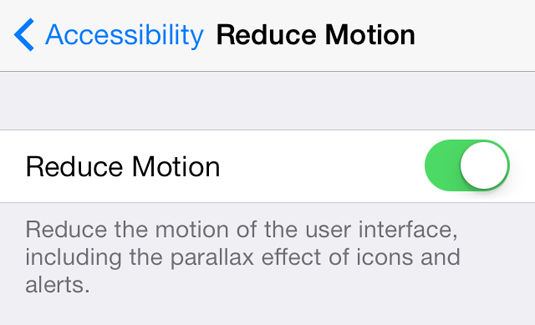 There are many more complainers in the forum, which has 146 postings as of early Thursday afternoon Pacific Time, with words such as "nausea", "headache", "motion sickness", "dizzyness", "eye strain", "vomit", "vertigo", "blurred vision", and "seizure" peppering the comment thread.

While it may be tempting to regard these reports as the whining of fragile snowflakes, there is likely a solid physical basis for their symptoms. As one academically minded poster writes:

Of course this is a real issue, and I'm not at all surprised it exists, given how psychedelic things look even in some of Apple's press photos. Visually induced motion sickness (VIMS) and visual stress (http://www.lucid-research.com/visualstress.htm) have become very active fields of research because of the implications in applications ranging from (FPS) video games to jet and airline pilot training through alleviating reading problems in dyslexics and enjoying contemporary art. And it happens to be one of my fields of research.

Another poster reports, "My research suggests that it is a very real problem attributed to Neuro-Ocular Vestibular Dysfunction, or what's been coined: See-Sick Syndrome," while a third advises, "If you have Ménière's or labyrinthitis DON'T upgrade," referring to two disorders of the inner ear that can cause vertigo in conjunction with certain visual stimulus.

It's unlikely that iOS 7's puke-inducing user interface is merely caused by so many users merely "holding it wrong." ®