Is this the silicon chip KILLER? Boffins boot up carbon-nanotube CPU

Lump of posh coal runs MIPS code like it's 1946

Look out, silicon: boffins in the US have created a simple working microprocessor out of carbon nanotubes, possibly paving the way for faster and less power-hungry computer chips.

Nicknamed Cedric by its creators at Stanford University, it is the first of its kind: it can fetch software written in a subset of MIPS machine code from memory and execute instructions at an almighty 1kHz clock rate.

With just 178 decision-making logic gates and the ability to count up to 32, it's a long, long way off from today's sophisticated smartphone and desktop processors with millions and billions of gates.

The carbon nanotube gates in this particular experiment are each about eight micrometres in size - but 9nm or so gates are possible. At this size they'll be dwarfed by the 22nm gates on the latest generation of silicon chips and even the forthcoming 14nm process parts.

It's already getting harder and harder to shrink today's silicon designs without ruining their energy efficiency or making them too complex to reliably build. Smaller silicon gates switch faster but they leak more current and heat - as anyone who has perched a notebook computer on their lap knows.

So mass-produced tiny carbon nanotube electronics could be the answer to humanity's demand for nippier and smaller technology - as, in theory, the nanometre-wide tubes should operate more quickly and gobble less power than bulky silicon transistor gates. (And it comes just as the world is ready to give up on Moore's Law.) 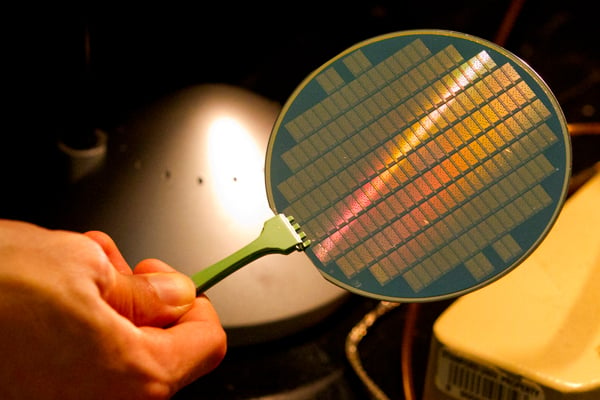 CNTs are made of long chains of carbon atoms that work as semiconductors: as many as 200 tubes are combined to create a single gate that can be switched on and off, just like a typical silicon transistor gate, and it needs only a tiny voltage to alter its state between highly conductive and non-conducting.

The researchers compared the nanotubes to a garden hose: the narrower it is, the easier it is stamp on it and shut off the flow. Their primitive processor is built out of PMOS logic, meaning the nanotube gates are normally powered on (which isn't particularly good for energy efficiency) and have to be switched off by a gate signal - just like early digital electronics. Today's silicon chips use far more efficient CMOS tech, something the Stanford boffins will have to address.

'There have been few demonstrations of complete digital systems using CNTs'

The team said its CNT computer, presented in the journal Nature today, "runs an operating system that is capable of multitasking: as a demonstration, we perform counting and integer-sorting simultaneously. In addition, we implement 20 different instructions from the commercial MIPS instruction set to demonstrate the generality of our CNT computer".

Multitasking might be pushing it in the circumstances, but we're told the machine is Turing complete - meaning it can solve any computation problem.

"People have been talking about a new era of carbon nanotube electronics moving beyond silicon. But there have been few demonstrations of complete digital systems using this exciting technology. Here is the proof," said Prof Subhasish Mitra, an electrical engineer and computer scientist who is one of seven boffins who worked on the project.

We're told the group has come up with an "imperfection immune" way of building the nanotubes: a fraction of these tubes often end up behaving like metallic wires, meaning they always conduct electricity and cannot be shut off as required to operate as a digital decision-making circuit.

So the scientists worked out a way of routing enough current through these imperfect, metallic tubes to vaporise them into little puffs of carbon dioxide.

And it's extremely difficult to grow the the tubes in straight lines, which is critical to building a working device. A natty layout algorithm is used to ensure the tiny number of wonky tubes do not affect the operation of the circuit.

"We needed a way to design circuits without having to look for imperfections or even know where they were," Mitra added.

The CNT chip design will need to undergo a vast amount of revision before it can be ramped up to today's standards and mass-produced, but H S Philip Wong, another professor who worked on the project, added: "CNTs could take us at least an order of magnitude in performance beyond where you can project silicon could take us."

Professor Jan Rabaey, a world expert on electronics at the University of California, Berkeley, said: "Carbon nanotubes have long been considered as a potential successor to the silicon transistor.

"There is no question that this will get the attention of researchers in the semiconductor community and entice them to explore how this technology can lead to smaller, more energy-efficient processors in the next decade."

Although you won't be buying a nanotube iMac any time soon, the latest experiment has brought an era of CNT computers one step closer, said said Supratik Guha, director of physical sciences for IBM's Thomas J. Watson Research Center and a leading CNT buff. "These are initial necessary steps in taking carbon nanotubes from the chemistry lab to a real environment," he suggested. ®