Smartphones, PCs, and now wearables... Is there any segment of the tech market COVID-19 hasn't wounded? 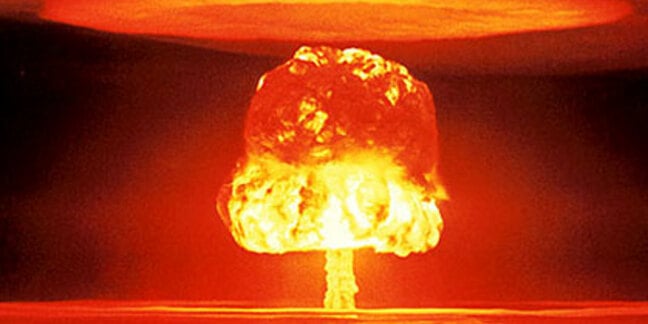 Computer problems are an annoyance for us all, but thirty years ago a fault in the Soviet Union's ballistic missile early warning system very nearly caused nuclear war, if not for the actions of Lieutenant Colonel Stanislav Petrov of the Soviet Air Defense Forces.

1983 was a very dangerous time for humanity. In the US, President Reagan decried the "Evil Empire" of the Soviet Union in March and was overseeing massive rises in military spending. Meanwhile, the Soviet communist leadership was growing increasingly convinced that the US might be preparing a nuclear first strike against them, and was planning its response.

Whereas Reagan's predecessors had taken a more conciliatory approach to the Soviets, Reagan was determined to ramp up the pressure. In April, the US navy conducted its largest-ever military exercise in the Pacific, and American airplanes invaded Soviet airspace over the Kurile Islands.

At the start of September the situation got even worse when the Soviets shot down Korean Air Lines Flight 007, killing all 269 passengers, including a serving US congressman. The Soviets claimed the flight was a spying mission, but it was later determined the aircraft simply strayed off course.

That latter finding led Reagan to open up GPS signals to the general public to stop such incidents in the future. But he also used the Korean incident to bolster support for moving Pershing II nuclear missiles into Europe, which were capable of hitting targets inside the Soviet Union within minutes.

And so in the early hours of the morning on the September 26, there was panic when the Soviet early warning system Oko, a monitoring system of geostationary satellites and ground stations designed to spot ballistic missile launches, reported that the US had fired off a missile against the Soviet Union. Then four more launches were reported by the system in quick succession.

"An alarm at the command and control post went off with red lights blinking on the terminal. It was a nasty shock," Petrov told Moscow News in 2004. "Everyone jumped from their seats, looking at me. What could I do? There was an operations procedure that I had written myself. We did what we had to do. We checked the operation of all systems — on 30 levels, one after another. Reports kept coming in: All is correct."

Petrov, then the officer in command of the Oko system at a bunker near Moscow, had the responsibility of informing the Soviet high command in the event of a US missile launch. Although he didn't have launch control of the USSR's huge nuclear arsenal, he was the first responder, and given the scant minutes available in the event of a surprise attack, his word would most likely have been accepted by the Soviet leadership.

But Petrov didn't make the call. He knew that the Oko system, which had only gone live the year before, was buggy. He also later described how logically such a move made no sense. While a first strike by the US wasn't out of the question, if the capitalists were to do so they'd launch everything they had, not a few missiles at a time, he reasoned.

Thankfully for all of us, Petrov was right. The Oko system has actually spotted sunlight reflecting off clouds and mistaken these for launches. Such sightings were supposed to be filtered out by the computer running the system, but the parameters hadn't been mapped out correctly. Petrov's decision was confirmed later by ground-based monitoring systems.

You'd expect Petrov to have been named a Hero of the Soviet Union for his actions, but he was very nearly demoted as a result. The subsequent investigation showed that he hadn't written up his log book correctly, and he was denied promotion following the Oko affair.

"If I was to be decorated for that incident, someone would have had to take the rap — above all, those who had developed the ballistic missile early warning system, including our renowned academicians who had received billions and billions in funding. So I should be thankful not to have been thrown the book at for that log," he said.

It wasn't until after the collapse of the Soviet Union that Petrov's story came out. He has since received numerous humanitarian awards, and in 2006 was honored in a special session of the United Nations.

Had he made the wrong call on that fateful day, it seems certain that the world would have been crippled by a massive nuclear conflict. A 1979 US government report into the effects of a nuclear war found that between 40 and 60 per cent of the American and Soviet populations would have been killed in the first 30 days, with the survivors facing a grim situation.

Electromagnetic pulses would have wiped out almost all power generation and supply – making the remaining cities prone to mass epidemics as water and seweage systems failed – and the remaining populace would be stricken with cancers and genetic damage from radiation.

Nuclear winter would block out much of the world's sunlight, which coupled with the lack of machinery, fertilizers, and pesticides, (as well as radioactive topsoil) would have led to mass starvation. By some estimates, only about 10 per cent of the world's population would still be alive a decade after such a conflict.

Shortly after the incident, Petrov retired from the armed forces to become a defense contractor and care for his sick wife. He lives off a small pension in the Russian town of Friazino with his son, a computer programmer, and says he's a little tired of all the attention.

"Foreigners tend to exaggerate my heroism," he said, pointing out he was only doing his duty. "I was in the right place at the right moment." ®

Updated your WordPress plugins lately? Here are 320,000 auth-bypassing reasons why you should

Another day, another critical set of flaws

Don't be a WordPress RCE-hole and patch up this XSS vuln, pronto