Video An unusual pairing of objects called a “low mass X-ray binary” has been spotted by astronomers in which a pulsar shifts between emitting fast radio pulses and X-rays.

Dubbed the “Transformer Pulsar” in some quarters and the “missing link” pulsar in others, the 18,000-light-year-distant binary in the M28 cluster works like this: the PSR J1824-2452I pulsar has a companion star about one-fifth the mass of the Sun. The pulsar's gravity means that it's constantly pounded with streams of matter from the companion.

Most of the time, those streams are deflected by the pulsar's magnetic field, but not all the time. When streams break through the magnetic field, they're sucked down to the surface of the pulsar and released as a blast of X-rays; then, as a kind of equilibrium returns, the pulsar quietens down to emitting radio waves again.

Spotting the low mass X-ray binary is the culmination of a long search, according to Dr Alessandro Papitto (of Barcelona's Institute of Space Studies), lead author of a paper on J1824-2452I in Nature (abstract here). “ We've been fortunate enough to see all stages of this process, with a range of ground and space telescopes. We've been looking for such evidence for more than a decade,” he said in a CSIRO release.

The reason the pulsar is seen as a missing link is this: pulsars typically slow down as they age, beginning with fast rotations, but shedding their kinetic energy as they emit radiation. That makes millisecond pulsars like J1824-2452I an anomaly. 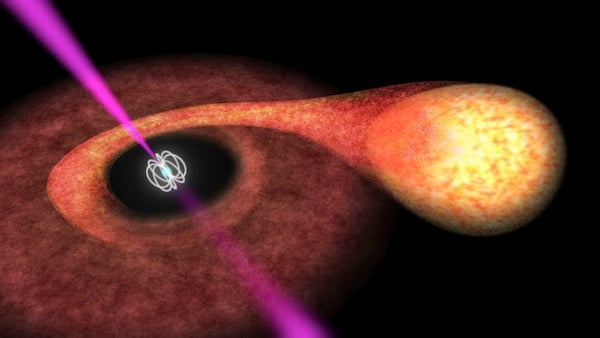 The pulsar and its companion. Image: ESA

Their existence was explained with the hypothesis that millisecond pulsars were “recycling” matter from a companion via an accretion disk, thereby also gaining angular momentum. That model was supported but not proven by the discovery of bright millisecond X-ray pulsars in binary systems during the 1990s.

"With our discovery of a millisecond pulsar that, within only a few weeks, switched from being accretion-powered and X-ray bright to rotation-powered and bright in radio waves, the search is finally over," says Alessandro Papitto from the Institut de Ciències de l'Espai in Barcelona, Spain in this ESA release.

The discovery needed a slew of instruments. It was first observed by the INTEGRAL X-ray satellite, with further observations by XMM-Newton and NASA's Swift. The Chandra X-ray telescope provided a precise position for the object.