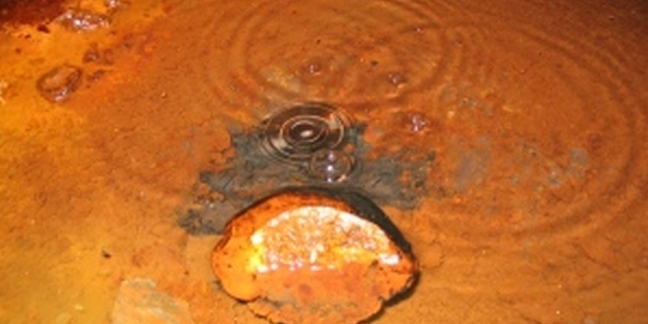 NASA scientists have reached a milestone in their quest to find life on the Red Planet after discovering significant traces of water in the Martian soil.

The Mars Curiosity Rover discovered water when investigating the very first scoop of soil it took from the surface of Mars.

The extraterrestial explorer analysed the dusty sample in its belly and found that about one part in every 50 of Mars' soil is made up of H2O. Boffins said this could help future missions to Mars, as astronauts would (in theory) simply have to heat the Martian topsoil in order to produce drinkable water.

"One of the most exciting results from this very first solid sample ingested by Curiosity is the high percentage of water in the soil," said Laurie Leshin, Rensselaer Polytechnic Institute Dean of Science and author of a report on the findings. "About 2 per cent of the soil on the surface of Mars is made up of water, which is a great resource, and interesting scientifically."

Curiosity touched down in Gale Crater on August 6 last year and immediately set about trying to find life on the red planet. It is the first rover to have the ability to analyze rock and soil samples and is armed with a chromatograph, a mass spectrometer and a tunable laser spectrometer, which can be used to identify chemical compounds and work out which key element isotopes are present in a sample.

The rover collected a scoop of dirt, dust and fine-grained soil from a sandy patch that NASA boffins dubbed "Rocknest". This sample was scooped into Curiosity's belly, where it was heated to 835 degrees Celsius. When baked, the sample also revealed the presence of chlorine and oxygen, previously only found at higher altitudes, as well as carbon dioxide, sulphur compounds and carbonate materials, which form in the presence of water.

"This is the first solid sample that we've analyzed with the instruments on Curiosity. It's the very first scoop of stuff that's been fed into the analytical suite. Although this is only the beginning of the story, what we've learned is substantial," Leshin added.

"We find that organics are not likely preserved in surface soils, which are exposed to harsh radiation and oxidants. We didn't necessarily expect to find organic molecules in the surface fines, and this supports Curiosity's strategy of drilling into rocks to continue the search for organic compounds. Finding samples with a better chance of organic preservation is key."

If water is present in the sample taken from Rocknest, it is likely to be found elsewhere on the planet, Leshin continued.

"Mars has kind of a global layer, a layer of surface soil that has been mixed and distributed by frequent dust storms. So a scoop of this stuff is basically a microscopic Mars rock collection. If you mix many grains of it together, you probably have an accurate picture of typical martian crust. By learning about it in any one place, you're learning about the entire planet."

Most excitingly of all, the presence of water on Mars could make life possible for any future explorers. Planet Earth is not exactly short of wannabe pioneers, with 100,000 people signing up to take a one way mission to the Red Planet.

"We now know there should be abundant, easily accessible water on Mars," said Leshin. "When we send people, they could scoop up the soil anywhere on the surface, heat it just a bit, and obtain water."

NASA is delighted with the results of the latest experiment.

"This work not only demonstrates that SAM [Sample Analysis at Mars] is working beautifully on Mars, but also shows how SAM fits into Curiosity's powerful and comprehensive suite of scientific instruments," said Paul Mahaffy, principal investigator at NASA's Goddard Space Flight Center in Maryland.

"By combining analyses of water and other volatiles from SAM with mineralogical, chemical, and geological data from Curiosity's other instruments, we have the most comprehensive information ever obtained on Martian surface fines. These data greatly advance our understanding of surface processes and the action of water on Mars."

Some 34 researchers contributed to the study and the results were published in Science today under the name "Volatile, Isotope and Organic Analysis of Martian Fines with the Mars Curiosity Rover". ®