An astronaut and expert robotics engineer serving aboard the International Space Station has built a dinosaur from odds and ends salvaged from around the orbiting outpost. 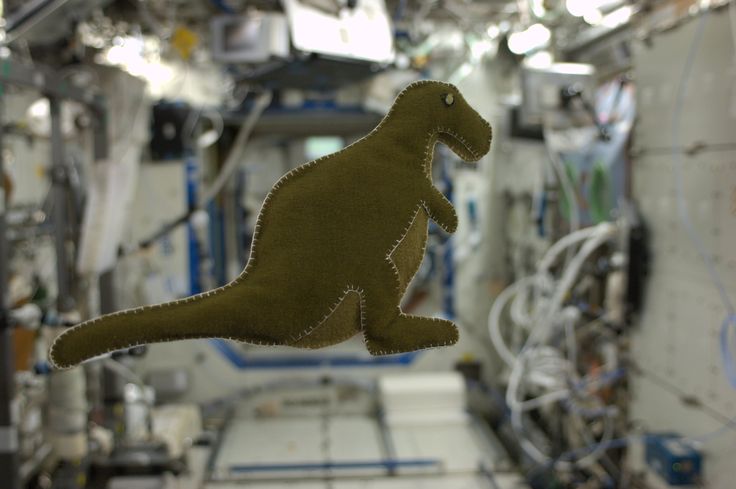 What an expert NASA roboticist is capable of

'Naut Karen Nyberg, who currently holds the job of flight engineer on the station, is an expert roboticist by training, having several degrees and a stint as Chief of the NASA Robotics Branch to her credit. However she did not, as one might suppose, put these skills to use when she decided to assemble a spacegoing dinosaur in her spare moments.

Rather Ms Nyberg chose to deploy her perhaps equally advanced expertise in sewing and quilt-making, and fashioned a small cuddly dino as opposed to a giant Transformers-style robot or animatronic offering. Then she popped a photo of the little fellow drifting in zero gravity onto Pinterest, as you do.

"Made in space!!" she enthuses in the caption, before giving details on the construction materials:

I made this dinosaur for my son last Sunday, September 22. It is made out of velcro-like fabric that lines the Russian food containers found here on the International Space Station. It is lightly stuffed with scraps from a used t-shirt.

Nyberg travelled up to the station aboard a Soyuz capsule from the Russian space-drome at Baikonur on 28 May. She became an astronaut in 2000, and went into space once previously – in 2008 – as a mission specialist aboard the shuttle Discovery. She lists her recreational interests as "running, sewing, drawing and painting, backpacking, piano, and spending time with [her] family". ®