NASA has mapped the "cloud" structure of an alien world for the first time using its Kepler and Spitzer space telescopes, an early step towards finding planets with human-compatible atmospheres. 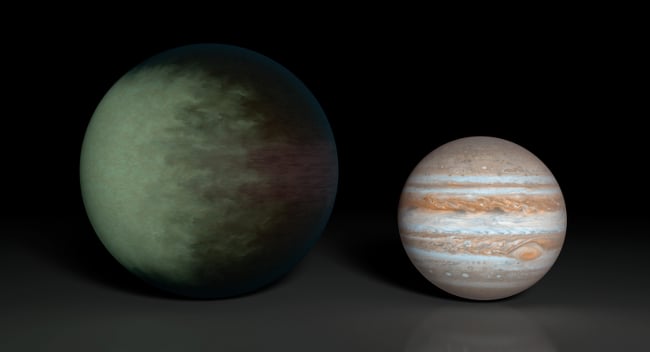 Kepler-7b (L), which is 1.5 times the radius of Jupiter (R), has its clouds mapped by Kepler and Spitzer.

While the agency has been able to figure out the temperature of distance planets before, the study of hot, Jupiter-like Kepler 7b is the first map of a world's skies.

"By observing this planet with Spitzer and Kepler for more than three years, we were able to produce a very low-resolution 'map' of this giant, gaseous planet," said MIT's Brice-Olivier Demory, lead author of the study. "We wouldn't expect to see oceans or continents on this type of world, but we detected a clear, reflective signature that we interpreted as clouds."

Kepler 7b was one of the first of the more than 150 exoplanets the Kepler telescope has spotted outside our solar system. Before the scope's issues with its reaction wheels stopped it from hunting new worlds, Kepler had gathered four years' worth of data, which boffins are still analysing.

In visible-light observations, Kepler saw a bright spot on the western hemisphere of 7b, but wasn't able to identify it without help from Spitzer. Spitzer used infrared light to measure the planet's temperature, estimating it at between 1,500 and 1,800 Fahrenheit (815°C to 982°C) – too cool to be the source of the light Kepler had seen.

"Kepler-7b reflects much more light than most giant planets we've found, which we attribute to clouds in the upper atmosphere," said Thomas Barclay, Kepler scientist at NASA's Ames Research Center. "Unlike those on Earth, the cloud patterns on this planet do not seem to change much over time – it has a remarkably stable climate."

The study gives boffins a place to start when attempting to figure out the atmospheres of planets that are more like Earth in composition and size and that could be future homes for the human race.

"With Spitzer and Kepler together, we have a multi-wavelength tool for getting a good look at planets that are trillions of miles away," said Paul Hertz, director of NASA's Astrophysics Division.

"We're at a point now in exoplanet science where we are moving beyond just detecting exoplanets, and into the exciting science of understanding them."

The full study, "Inference of in homogeneous clouds in an exoplanet atmosphere", will be published in the Astrophysical Journal Letters and can be found online here (PDF). ®