Search me, baby, one more time

Search your computer... and, er, Wikipedia and Reddit and...

The plan was to include even more Smart Scopes in 13.04, but that didn't happen. Now Smart Scopes are here. The Unity Dash will search across everything from your local hard drives to Wikipedia, Reddit and Flickr.

For example, a search for "firefox" will bring up not just local results like the Firefox app and any documents you might have that contain the word, but also the Wikipedia entry, stories on Reddit, books on Amazon and many others depend on which Scope you have enabled.

How useful this is will depend on how you use (or want to use) the Unity Dash. If you see the Dash as little more than a glorified application launcher, the new clutter of results is going to get in your way. Fortunately you can turn off Smart Scopes on an individual basis (right click the scope) or completely using the settings panel.

If you frequently search from the Dash for more than just applications to launch the new Smart Scopes can be very handy, though the number (and choice) of Scopes enabled by default can produce an overwhelming amount of noise. Most people will likely want to narrow down the number of active Scopes to something more manageable.

Smart Scopes also seem to have become a little smarter. Search results were a bit more relevant than when I have tested this feature in the past, though there is still plenty of junk. Why Britney Spears albums come up on a search for "Thailand" is something only Canonical knows. Maybe. 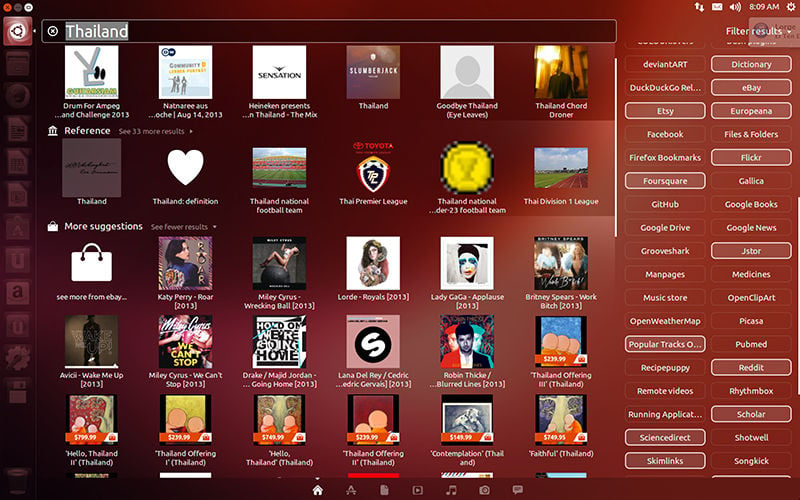 I find Smart Scopes to be a mixed bag. They can be fun, especially the scopes that connect to your online accounts. When you log in to online services Smart Scopes can provide some serendipity, like bringing up photos you've long since forgotten about, or Wikipedia entries that offer some little bit of trivia about something you're searching for.

However, while they're fun to play with for a little while I find them distracting when I'm trying to get work done. When I was writing this review, for example, and need to quickly look up something about Mir, I don't want to see the Wikipedia page for the Russian space station of the same name.

Smart Scopes aren't the only new feature you'll notice in this beta. While they are undoubtedly the most obvious, there are plenty of other minor tweaks that add up to a nicer overall Ubuntu experience. There's a new keyboard applet for quick switching between keyboards (handy for those of you frequently writing in multiple languages). Ubuntu has also fixed a regression that made some GNOME apps - notably the Nautilus file browser - look out of place in Ubuntu's default theme. This release also gets the usual slate of new desktop wallpapers.

You may also notice a new option in the installer asking if you'd like to set up online backup service Ubuntu One. Having been burned by early versions of Ubuntu One I've stuck with Dropbox thus far, but users in Canonical's forums report that with 13.10, Ubuntu One may finally be stable and reliable enough to trust with your files.

Ubuntu 13.10 has makes some solid strides and sees plenty of tweaks; it just needs to refine the flagship search feature. Hopefully, this will come with time. ®