Cache that pigeon, pursuers of the SPC-2 squadron

Oracle has announced new cache-heavy ZFS appliances and has seized the SPC-2 benchmark top spot with one of them.

Announced in early September, the third-generation ZFS appliance has most I/O served from DRAM cache, up to 2TB of it, and that makes these boxes stream data like a dragster sucking nitrous oxide.

As before the ZFS Appliances are integrated with various Oracle database features, such as hybrid columnar compression, to make a better fist of storing Oracle SW data than other vendors' storage, Oracle claims.

The O/S is, we are told an SMP design that is multi-core processor-aware and can provide up to 32GB/sec of sustained bandwidth. It has a Hybrid Storage Pool cache implementation, using DRAM, separate read and write flash caches, and disk, which delivers a 2x overall response time improvement compared to the previous ZFS Appliance generation. 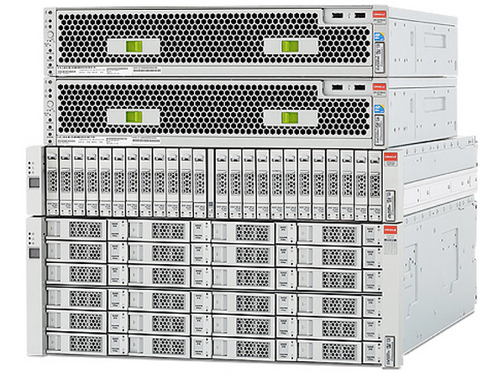 The table below lists the main ZS3-2 and ZS3-4 configuration differences:

Oracle ZS3 specs - click on chart to ease your eyes.

"SPC-2 consists of three distinct workloads designed to demonstrate the performance of a storage subsystem during the execution of business critical applications that require the large-scale, sequential movement of data."

This is a benchmark focussed on streaming data and not random I/O. For that the SPC-1 benchmark is used.

In the SPC-2 benchmark Oracle used a 2-node cluster with each node having dual ZS3-4 controllers, each with 1,024GB of cache. There were 384 x 300GB15K rpm disk drives in a disk mirroring set-up.

The system scored 17,244.2 SPC-2 MB/sec overall with an SPC-2 price/performance of $22.53, which is based on list prices. It is the best result so far. The chart below plots SPC-2 MBPS numbers against price/performance, and shows the relative position of Oracle's ZS3-4 system compared to some other vendors' SPC-2 scores. 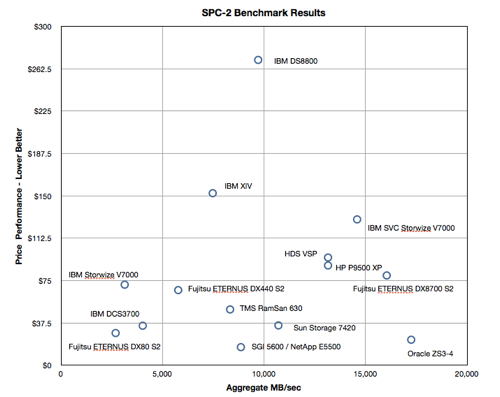 As the chart shows the Oracle system is a better SPC-2 performer than systems from EMC, HP, IBM and NetApp in terms of aggregate MB/sec and has the second lowest price performance. But the leading price/performer, NetApp's E5500 is far slower at streaming data than the ZS3-4 system Oracle used. Also the street price/performance numbers will be lower than list price/performance, depending on how good you are at getting a discount from your supplier. ®