And SUCK POWER from SAUNAS, yet

Top engineers at MIT say they have come across a handy effect which could seriously boost the efficiency of a critical piece of kit used in many important technologies.

The piece of kit in question is the humble water condenser, which has been in use for hundreds of years: James Watt introduced it to the earliest steam engines, turning them from inefficient curiosities to the motors which powered the Industrial Revolution. Today, condensers are critical to the functioning of most powerplants - and if they can be made better, they could greatly strengthen the case for the reintroduction of airships.

In essence, a condenser works by exposing steam to a cold surface. This causes the steam to turn into water, which flows down the cold surface and drips off into a collecting sump.

What the MIT boffins have found is a way of getting water droplets to jump off the cold pipes in the condenser and fall into the sump more quickly than they otherwise would, clearing room for new droplets to form. The condenser thus does its job of turning steam to water more efficiently.

The method relies on the discovery that droplets forming on a certain type of advanced superhydrophobic coating can leave the surface with an electric charge. If a suitably charged plate is nearby, this will draw the droplets away from the coated tube - preventing them from falling back on as they often would.

That's good news for powerplant designers, then, who can expect to wring more electricity out of a given amount of uranium, coal or gas* (or in rare solar-thermal or geothermal examples, a given amount of renewable heat). So it's a hearty slap on the back for MIT postdoc Nenad Miljkovic, mechanical engineering professor Evelyn Wang, and their colleagues.

But what's the airship angle? 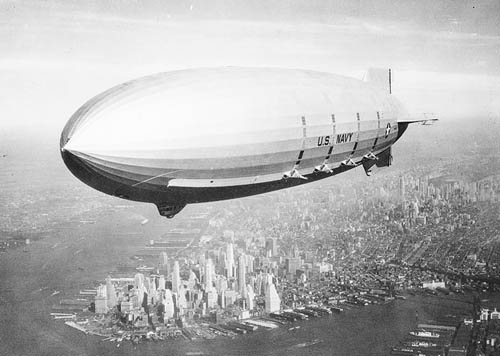 The things up the sides are the condenser arrays

Well, as regular readers of Reg airship coverage will know, water condensers are a key bit of tech should you wish to fill your ship - as most modern designers would - with helium. Using helium avoids the risk of the ship blowing up, Hindenburg style: but it also introduces a problem, namely that one can't be simply venting off pricey, precious helium into the air in the normal course of events.

That's a problem because as the ship flies along it will burn fuel and become lighter, making it hard even to keep it below pressure height after a while - let alone get it down to a landing after a long flight.

To deal with this, the US Navy's helium-filled flying aircraft carriers of the 1930s carried condensers which turned the steam from their engine exhausts into water. But the condensers were heavy, seriously cutting into the load the ships could carry, and still weren't really up to their task of gathering enough water ballast to compensate for fuel burned.

Various modern airship plans have also specified the use of exhaust condensers, though as far as we're aware none are actually flying. But if water condensers can now be significantly more efficient, that's a good thing for airship enthusiasts.

Like most ideas of this kind, the idea could also be applied in reverse. This would allow one to harvest electricity from moist air, provided there was a source of coolness - for instance a nearby body of water - to hand.

"You just need a cold surface in a moist environment," says Miljkovic. "We're working on demonstrating this concept."

So there's obviously a bright future ahead for gizmos which will charge up your tablet while you relax in the sauna, for example.

There could be other benefits, too: the US military's efforts to make drinking water out of diesel exhaust might prosper, for instance. No doubt our knowledgeable readers will be able to think of more applications still: the comment threads await you.

*Gas is generally burned in gas turbines as opposed to steam boilers, but modern gas powerplants generally use a combined cycle in which waste heat from the gas-turbine exhaust is used to drive a supplementary steam turbine. This naturally has a condenser, and thus would benefit from the new MIT insights.