The life of Pi: Intel to give away Arduino-friendly 'Galileo' tiny-puter

Give me the undergrad, I will give you the dev - Krzanich's Roman pledge

Intel is now actively attempting to recruit the maker community to aid it in its battle against ARM.

Today at a major gathering of European hardware hackers in Rome, the chip giant announced it has cooked up a Raspberry Pi-style board computer with the blessing of Arduino.

The computer is called the Galileo and it sports a 400MHz Intel Quark X1000 system-on-a-chip. Quark was announced back in September at Intel Developer Forum and is described as a 32-bit, single-core, single-thread CPU compatible with the Pentium instruction set.

Galileo also supports Arduino-oriented “shield” add-on cards drawing either 3.3 or 5V. Galileo’s digital pins 0 to 13 - and the adjacent AREF and GND pins - its analog inputs 0 to 5, its power header, ICSP header and UART port pins are all in the same locations as their equivalents on the Arduino Uno R3 board. 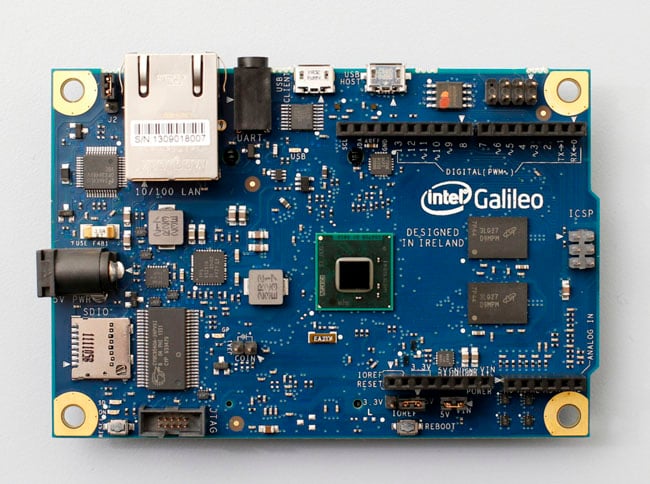 In addition to the GPIO, the Galileo board has a 10/100Mb/s Ethernet port, a full PCI Express 2.0 mini-card slot, separate USB 2.0 micro connectors for client and host links, and a JTAG header.

For storage, there’s 8MB of Flash for bootloader code and Arduino “sketches”, plus a Micro SD port for up to 32GB of extra storage. The unit has 512KB of embedded SRAM and 256MB of DRAM.

You can run the whole thing off a 5V, 3A AC adaptor. Unlike the Beagleboard Beaglebone, it doesn’t run off power supplied by a USB-connected computer. Unlike the Raspberry Pi, Galileo does have a real-time clock that can be kept ticking by adding a button battery.

In a bid to speed up adoption of Gallileo, Intel will give away 50,000 of the board to a thousand universities around the world, Intel CEO Brian Krzanich pledged at Maker Faire Rome today. He expects this will take a year and a half to accomplish.

Krzanich said 17 of these universities have agreed to develop learning tools based around Galileo and promised that more educational institutions will be joining the initial group soon.

Galileo will become available before the end of November. The price has yet to be set. There are more details at the Arduino site. ®