Mars boffins: You fools! That's no CRATER – it's a SUPER VOLCANO

Ancient Mars could have been home to a type of supervolcano that affected its atmosphere and was partly responsible for the barren red planet scientists are exploring today. 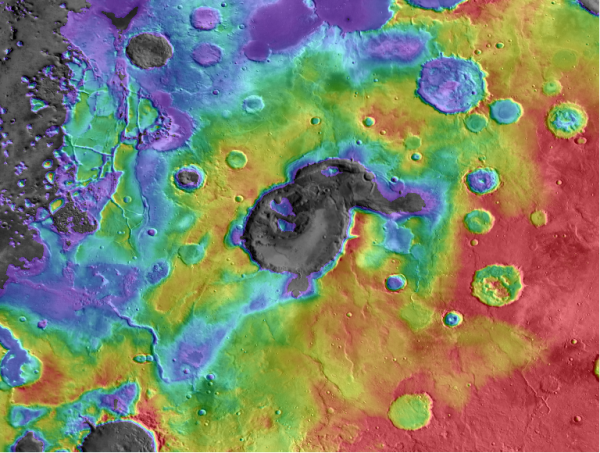 Boffins from the Planetary Science Institute and the NASA Goddard Space Flight Centre have postulated that a vast circular basin on the Red Planet known as Eden Patera – which was previously thought to be an impact crater – is actually the remnants of a massive new type of volcano.

When a "supervolcano" erupted, the scientists theorise, it left a volcanic "caldera" – a depression in the planet’s surface – which looks like a crater.

"This highly explosive type of eruption is a game-changer, spewing many times more ash and other material than typical, younger Martian volcanoes," Goddard’s Jacob Bleacher said. "During these types of eruptions on Earth, the debris may spread so far through the atmosphere and remain so long that it alters the global temperature for years."

The researchers reckon that a large body of magma loaded with dissolved gas rose to the surface very quickly. They compared the supervolcano’s eruption with a bottle of soda being shaken, blowing its contents far and wide across the Martian landscape.

Because so much material explodes away, the depression left behind can collapse even further, making it look less like the site of a volcano. Similar eruptions happened on prehistoric Earth in places like Yellowstone National Park in the US and Lake Toba in Indonesia.

Eden Patera is located in the Arabia Terra region of Mars, an area known for its impact craters. But PSI’s Joseph Michalski began to suspect that it wasn’t just another crater when he examined data from NASA's Mars Odyssey, Mars Global Surveyor and Mars Reconnaissance Orbiter spacecraft, as well as from the European Space Agency's Mars Express orbiter. He noticed that the “crater” was missing its rim and the ejecta – melted rock that splashes out when an object hits a planet.

The researchers say the new type of volcano explains the discrepancy between the lava and pyroclastic materials found on Arabia Terra and beyond could not be accounted for by the shield volcanoes.

Bleacher identified features at the site that showed volcanism, such as the rock ledges which are usually left behind after a lava lake slowly drains and the kinds of faults and valleys around the crater that are created when the ground collapses due to volcanic activity beneath the surface. The team also reckons that a few other basins nearby could be volcano remnants as well.

"If just a handful of volcanoes like these were once active, they could have had a major impact on the evolution of Mars," Bleacher said.

The full study, “Supervolcanoes within an ancient volcanic province in Arabia Terra, Mars”, was published in Nature. ®

But only to bits that aren’t conflict hot spots

‘Honoring the honest’ is the catchphrase for massive new online scheme

And use the experience as a template for new products everywhere