After a stellar start to the World Solar Challenge, the fancied Nuon team from Delft has had to cop a ten minute penalty for breaking speed limits, while Japan's Tokai University entrant has been given a more serious 30 minute penalty.

The penalties will probably put Solar Team Twente (also from The Netherlands) in the lead at least for a while since it, along with Nuon and Tokai were the overnight front-runners. Nuon was the first to arrive at the Dunmarra control point after Day one, at 4:26pm, followed by Twente and Tokai.

With all cars obliged to take a 30 minute stop at the control point, and with racing ending at 5pm, that gave the three vehicles a strong overnight position. They were followed by the teams fielded by Stanford University, the University of Michigan, Solar Team Eindhoven, and Australia's Team Arrow in 7th spot.

Eindhoven's position is a considerable achievement since it puts a Cruiser-class car among the designed-for-speed Challenger cars.

By The Register's reckoning, Nuon and Twente will retain their position out in front of the pack, with Tokai likely to find itself having to fend off the Michigan and Stanford entries before Day 2 is complete.

The World Solar Challenge says Nuon was penalised for breaking the speed limit. Tokai's penalty (which mean its Tenant Creek control stop was doubled in time from 30 minutes to 60 minutes) as imposed to punish the entry for “the behaviour of its media car”. 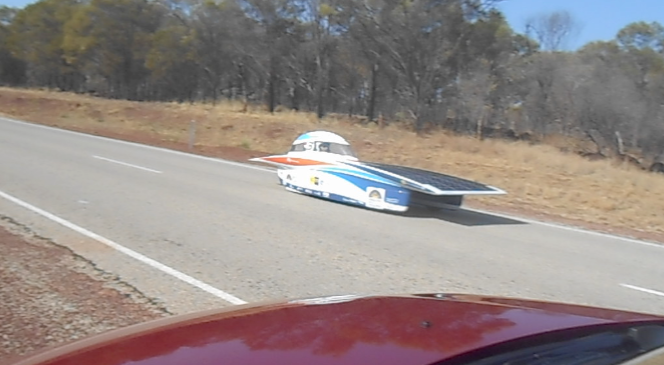 the end of racing on Day One.

The field is also starting to thin out: as well as the rollover which put paid to the Cambridge University entry, Japan's Hachinohe Institute of Technology was unable to pass pre-start scrutineering, and since the start, the event is recording New Zealand's HybridAuto, South Korea's KUST entry and the ITS team from Indonesia as being trailered.

"Trailered" vehicles are, however, still competing: having been unable to stay with the pack, they're brought forward to the next checkpoint. At the end of the race they will be assessed solely on distance traveled under solar power. ®