No race records on the cards for 2013

Day Two of the World Solar Challenge has ended with only a handful of the vehicles reaching the checkpoint at Ti Tree, north of Alice Springs.

The leading vehicle remains Nuon from the Netherlands (1,340 km covered), followed by Tokai University (1,332 km) and Team Twente (1,295 km). Stanford and the University of Michigan round out the top five.

With the teams halted overnight at or near Ti Tree, it's clear that this year's race won't see any line honours records set. The 2013 rule changes – in particular the requirement that all Challenger Class cars be four-wheelers, and that the driver's seating position is more upright – has slowed the race down.

Both the extra wheel and the new driver position have added drag to the machines.

At the current speed, the leaders are running around 100 km per day slower than in the 2011 race. Organisers told The Register this indicates that the new rules are having their intended effect, with entrants needing to put together new designs rather than than being able to “run to a formula and with with a chequebook.”

Nuon, for example, has traded off a little extra weight for a little extra charge capacity at checkpoints: it's carrying panels that are unpacked and set up on tripods to push more energy into the batteries while it's sitting still. 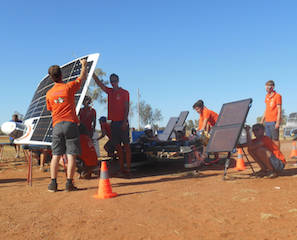 Nuon at the Ti Tree checkpoint, its extra

The slower pace has, however, also forced the sudden revision of teams' trip planning, with Ti Tree's football field turned into an impromptu camping ground by regional shire services manager David Stokes. When your correspondent left the city to head for Alice Springs, the Team Twente support crew was staking out spots, with others expected to follow.

The cruiser class is now led by German team Hochschule Bochum, pushing Eindhoven's Team Stella into second place. Australia's Sunswift, while nearly a day behind the leader, is in third place in the class. 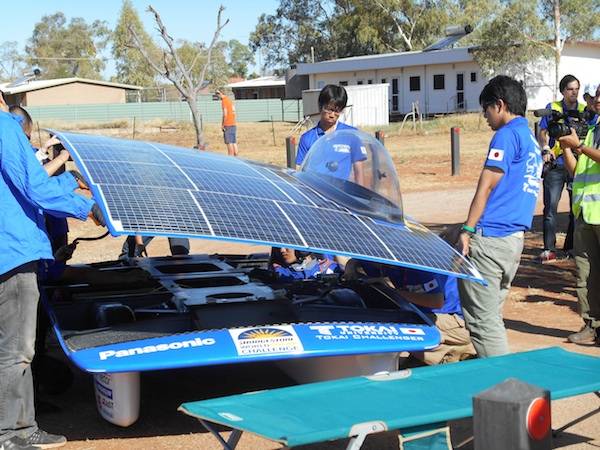 At the end of the second day, the Adventure class was led by Australia's Aurora Evolution, Chile's Antakari, and the Philippines' SIKAT.

Even the front-runners will find the original third-day target, Coober Pedy, nigh-well unattainable: they're around 800 km away, and there's a mandatory checkpoint stop in Alice Springs. Teams would need to manage an average speed of more than 97 km/h, after two days averaging around 80 km/h. However, the weather is on their side. ® 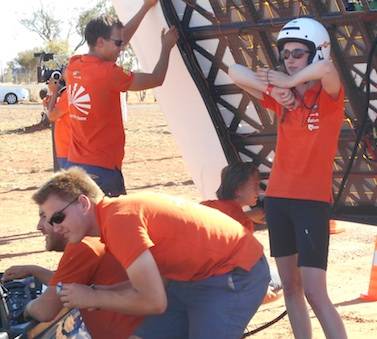 Outside it's only 39°C, so Nuon's driver

gets a chance to cool off at the Ti Tree checkpoint.

Bootnote: To relieve the mind of a Reg reader who can't understand why a racing car would be fined for breaking the speed limit: the entire event is run on public roads, and receives its permit on the condition that contestants follow the speed limits.

Speeds are set by a computer, not an accelerator pedal. If, then, a speed limit breach is observed, it's likely to arise from the support crew missing a transition from 130 km/h to something slower as the car approached a town. ®