Microsoft will release its own apps to manage all the iOS and Android devices that are flooding into organisations as part of the Bring Your Own Device trend. They will be available for download from app stores later this month.

The official Remote Desktop (RDP) clients were announced on Monday along with a new RDP client for Mac OS X.

The iOS and Android clients are completely new and the Mac client has been given a complete overhaul.

There is already an abundance of third-party Windows RDP clients in the Apple and Google app stores, but the iOS and Android RDP clients announced Monday are the first code to come from Microsoft itself.

It's part of a move from Microsoft to broaden support for BYOD using a suite of tools for managing services, PCs and devices in the Windows Server 2012 R2 and Systems Center 2012 R2. The pair of R2s are due on 18 October. You can see why Redmond has made this move; customers would otherwise need to seek management software or utilities from its rivals.

But while Microsoft is surrendering the end point argument and accepting that users are running Apple and Google devices at work rather than Windows 8 or Surface machines, Redmond will still get paid.

A full Remote Desktop Services (RDS) setup requires CALs (Client Access Licenses) for each user or device, so even iPad users end up forking out for using Windows.

The price of the Data Center edition of Windows Server 2012, meanwhile, is also going up – as reported. The Server, which offers unlimited virtualisation, will jump 20 per cent to $6,155 for a pair of processors, according to the new licensing data sheet. 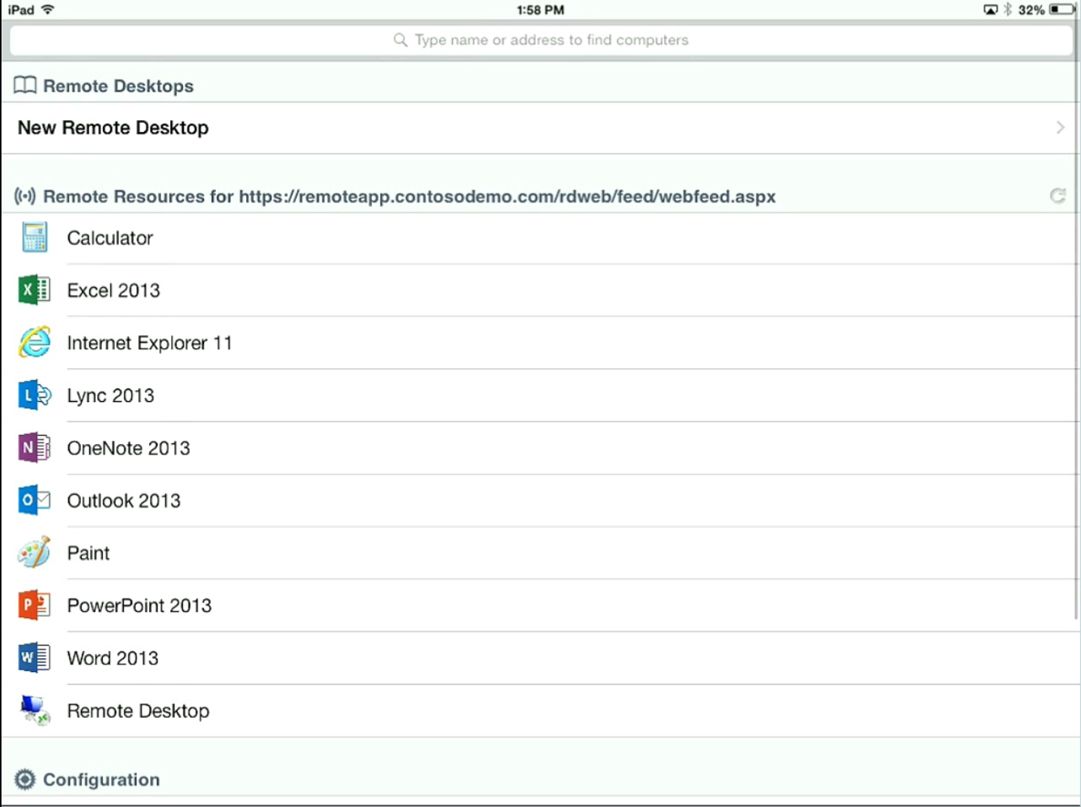 iPad users can run a host of Windows apps via RDP

The new clients support RemoteApp, which lets you run an individual application remotely, as well as a full remote desktop. This means you can have the odd experience of seeing apps like Excel and Internet Explorer 11 running on an iPad or Android tablet. A similar RDP client already exists for Windows RT, enabling users to run x86 desktop applications that would otherwise be unavailable for users of the ARM build of Windows, found in Microsoft's Surface RT (and hardly anywhere else).

An RDP client can be handy for home users, who can use it to connect to a Windows desktop from an iPad at home, but the market Microsoft has in mind is enterprise device management. The new apps work alongside several other features in the Server 2012 R2 wave of updates on 18 October.

Windows InTune, a cloud service, lets administrators manage these devices and includes a portal for company apps as well as features like remote wipe and policies to enforce data encryption and password use. System Center Configuration Manager, which is for managing desktop PCS, connects to InTune to allow device management from a single console.

Is Microsoft's new love for iOS and Android in the enterprise a sign of success as it extends its reach, or failure as it acknowledges the drift away from PCs towards tablets and smartphones which do not run Windows? Both are true.

Support for multiple devices is essential if the company is to keep its cash-cow Office applications as corporate standards, and maintain the viability of custom business apps running on Windows. But making non-Windows devices more acceptable and controllable on a Microsoft-platform network may actually accelerate the decline of the PC.

Microsoft has always struck a rather more pragmatic stance in Server and Tools than it has in the rest of its business. Back in 2005, Microsoft added the ability to manage Red Hat Advanced Server 2 to its Windows virtual server management software on the back of a campaign against the "evils" and cost of Linux.

Chief executive Steve Ballmer joked at the Microsoft Management Summit where the capability was demonstrated: "As much as that hurts my eyes, I know that's an important capability for the virtual server technology for our customers." ®