Editors should get dosh, bureaucrats get too much, says outgoing fundraising chief

Comment The outbound exec of Wikipedia's tin-rattling nonprofit has admitted the organisation wastes public donations – and says procedures should be fundamentally changed to avoid corruption and self-interest.

In a candid statement, Sue Gardner, executive director of the Wikimedia Foundation, says she wants the worker bees rewarded – the editors who spend hours of unpaid time on Wikipedia – instead of the local chapters of bureaucrats who receive the money today.

"I wonder whether it might make more sense for the movement to focus a larger amount of spending on direct financial support for individuals working in the projects," she wrote.

All this fundraising has created a professional bureaucratic class - the Foundation has grown from three staffers in 2006 to 174 in 2012/13, with a year-on-year increase of 46 per cent - while editors continue to toil away unpaid. Gardner doesn't like this - and warns that the way the WFM largesse is currently doled out risks corruption.

"Too large a proportion of the movement's money is being spent by the chapters [whereas] the value in the Wikimedia projects is primarily created by individual editors: individuals create the value for readers, which results in those readers donating money to the movement. ... I am not sure that the additional value created by movement entities such as chapters justifies the financial cost," Gardner wrote.

Worse is the risk for trading favours, taking advantage of positions and troughing in general, she said. Gardner warns that the FDC [Funds Dissemination Committee] process is "dominated by fund-seekers, does not as currently constructed offer sufficient protection against log-rolling, self-dealing, and other corrupt practices. I had hoped that this risk would be offset by the presence on the FDC of independent non-affiliated members".

Gardner questioned whether bankrolling local chapters was the way to go - and urged the community to look for alternatives.

"With such a high proportion of movement resources now funding [chapters' staff and offices], we need to ask if the benefits are turning out to be worth the cost. It's possible that a well-managed shift to some staff support can help a volunteer community stay energized and enthused, but the risks and costs of setting up bricks-and-mortar institutions also dramatically increase, alongside sometimes difficult dynamics between staff and community."

She added: "I believe we're spending a lot of money, more than is warranted by the results we've been seeing. I am concerned by the growth rates requested by the entities submitting funding requests to the FDC." 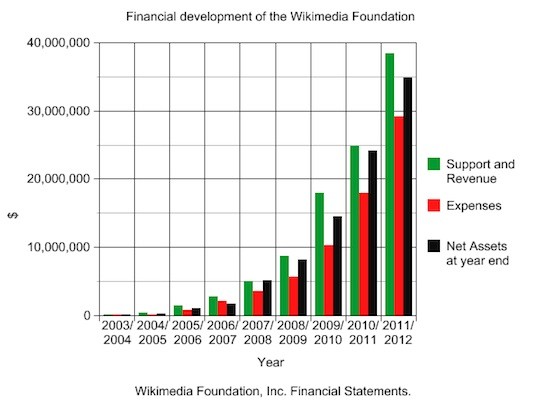 It's a very frank assessment of an issue some would like to see swept under the carpet. A big chunk of discretionary spending ended up with the local chapters of three wealthy developed countries, including the UK and Germany.

The UK chapter has been beset with conflict-of-interest issues - particularly over certain members' personal ties with Gibraltar - while the German chapter dished out money for some peculiar reasons. One project entailed photographing politicians and another going to pop concerts.

Gardner ends with a call for more imaginative ways of getting people excited about Wikipedia. Wikipedia's internal newsletter The Signpost has a comprehensive summary of Gardner's report and related issues here.

Contributors (or "editors" in Wiki parlance) are becoming increasingly feisty. A fortnight ago editors rebelled against the decree to implement the much-criticised "Visual Editor", an expensive engineering project paid for out of donations to Wikipedia.

The community voted to turn off the Editor and for an hour implemented its own technical alternative, forcing the WMF to climb down on its insistence that the Editor be turned on by default. If you'd seen so much cash wasted – and you hadn't seen a penny – you'd probably be pretty feisty too. ®