Dear Apple: Want to stay in business? Make an iPhone people can afford

You're going to run out of rich folk to keep your sales growth up, predicts analyst

Apple needs to start making bargain basement mobes because soon there won't be enough rich new iPhone customers left in the world to prop up its sales growth, a leading analyst has suggested.

The claim comes in a report by Toni Sacconaghi, senior analyst with Bernstein Research, with the snappy title: "Are There Enough Wealthy People in the World to Sustain iPhone Unit Growth?"

The tech sales researcher said that "only a finite number of users globally can afford a $450-plus smartphone", warning that Apple could struggle to pull in new users in the face of tough competition from Android phones.

This could mean that the fruity firm's growth will "invariably slow" unless it caters to the lower end of the market. There are expected to be five times as many first time budget smartphone buyers in 2015 as in 2013 year, the analyst suggested, and Apple needs to get in fast and steer them towards the fruity path if it wants to survive.

Sacconaghi added: "Invariably, we and most investors believe that Apple should introduce a lower-priced device, in large part because the high end of the smartphone market is becoming increasingly saturated, leaving limited room for ongoing growth."

The report made the "surprising" claim that the majority of new iPhones are still sold to first-time fanbois and gurlz. In 2011, 52 million iPhones were sold to new users, accounting for 72 per cent of the market. This figure dipped in the next two years, but in 2013 the majority of new iPhone owners were still brand new to the world of Apple mobes, with 57 percent, or 85 million people, choosing to take Cupertino's blue pill for the first time.

However, to keep up this ratio between Apple virgins and world-weary fanbois, Apple will have to sell a whopping 125 million iPhones in the next two years. Sacconaghi fears this might not be achievable, asking where these users will come from "if the benefit from carrier additions is modest beyond China Mobile" – a carrier with more than 100 million customers, probably the world's biggest, which does not offer the iPhone on contract. 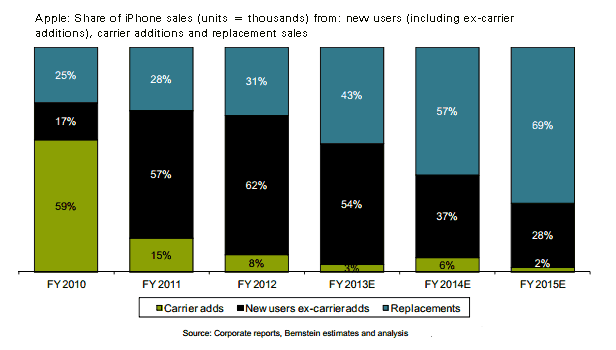 If a deal is inked between Apple and China Mobile, the analyst continued, Apple could bolt on at least 15 million more customers almost overnight.

The analyst said: "[A]bsent carrier additions or new offerings, iPhone unit growth is likely to be tepid over the next two years. We note that the number of consumers who can afford a high-end phone that don't already have one is gated, as is the number of available high-end devices to take from competitors.

"We estimate that approximately 800 million people have a high-end smartphone, and that – based on income levels across geographies – perhaps 1.25 billion can afford one, suggesting we are past the steep part of the adoption curve for new high-end smart phone users."

As Apple watchers already suspect, the fruity firm's ability to, ahem, "innovate needs" as far as smartphones are concerned appears to have been dampened, the report concluded.

So far, the only thing on Apple's horizon is the rumoured launch of a new iPad on 22 October, and we don't know how much of a features jump that will be on the existing iPad, although the technical specifications are likely to be upgraded.

So, Mr Cook, are you up to the job of stopping Apple from rotting? ®