And, just as F1 gave the world disk brakes, some of the innovations helping to drive the World Solar Challenge will probably end up giving lessons and technologies to the rest of the industry.

Meet Alain Chuzel who, with his wife Linda Bozarth, owns and operates SunCat Solar, a maker of specialist photovoltaic modules used not only by Nuon, but by many of the teams.

Chuzel doesn't make the solar cells – his speciality is taking cells from companies like SunPower, and packaging them up with two aims in mind: giving them a surface coating that maximises their ability to gather sunlight, and creating a structure that's suitable for the vehicles (the right stiffness, and light weight).

A consumer photovoltaic, Chuzel explained to The Register, is built with protection from the elements in mind. Hence the heavy layer of glass on the front, and the need to give the panels a standoff from the roof, so that air can circulate and keep the solar cells cool.

Cells that are too hot suffer a voltage drop, which limits their power output – which is why every team was spraying the panels with water at the control stop.

But Chuzel had another interest in this year's race: keeping an eye on a new structure he designed for team Nuon. The image below clearly shows two module types on the car. The newer modules have an orange substrate. 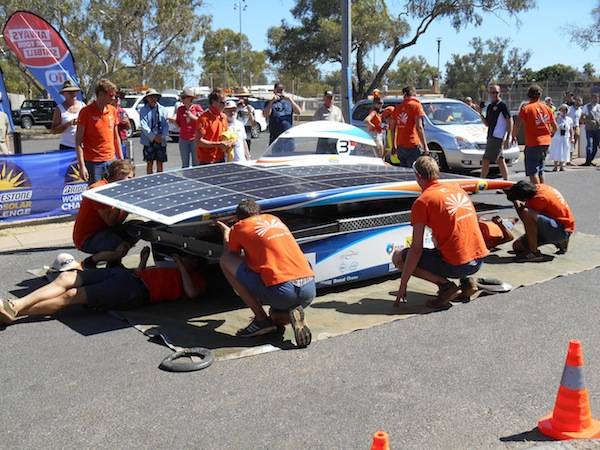 Chuzel's new panels on Nuon have an orange substrate.

The modules showing an orange background are the new modules. So new are they that SunCat didn't have time to manufacture a whole car's worth of modules.

What's different? The 10/1000ths of an inch coating on top of the solar cells, which has a tiny structure designed to capture more sunlight. Here's a close-up of a sample that Chuzel brought along for show-and-tell. 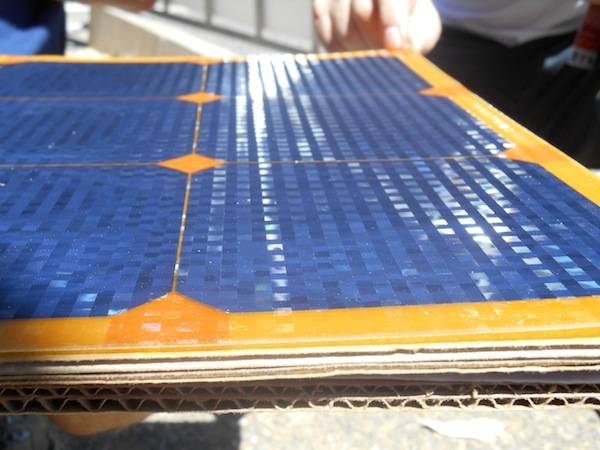 One of the engineering challenges, Chuzel explained, is to design a coating that doesn't reflect sunlight the way a consumer-grade glass-coated panel will. So for the Nuon modules, he's designed a transparent coating (“It's more fun to call it a goo”, he noted) that doesn't reflect light.

“Because we know that solar cars move a lot, we also wanted to make sure that no matter how these were oriented on the car, and no matter how the car moves around, we wanted it to have really good anti-reflection properties no matter what the angle.

“Previous texturing-type products are a little more sensitive to the angle.”

The structure – microscopic three-dimensional pyramids on the surface of the coating – is what causes the “cross-hatch” pattern visible in the image. The reason there's a cross-hatch pattern is a compromise: it indicates textures aligned in different directions.

“There is inherently a compromise whenever you do geometrical texturing. Because my target was solar cars and moving vehicles, I wanted the best average no matter what angle … and this design was what I came up with,” he told The Register.

For the Nuon team, the new modules made up around 40 percent of the total solar panel surface of the vehicle. Chuzel said measurements made by Nuon concurred with his own pre-race measurements: the experimental modules are about 1-2 percent more efficient than the other modules used on the car.

His next project is to reduce the thickness of the coating, so that the modules can be made lighter. ®

It can move without anything to push off from, but only via curved spacetime
Science11 Aug 2022 | 52