In September 1962, Sony evidently overstepped the mark when it showed off the world’s first “compact” transistorised “Videocorder” the PV-100. This was snapped up by American Airlines in 1964 as an in-flight VTR and PanAm would follow a year later. 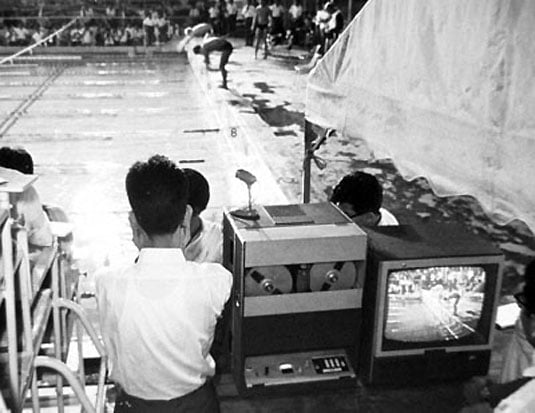 Sony PV-100 Videocorder at an outside broadcast swimming event

Ampex was not best pleased and sued Sony over this product in 1966. This open reel player was certainly a step up from film projection, but the flight attendants frequently messed up the tape threading and the tapes too, due to careless handling among the in-flight catering. 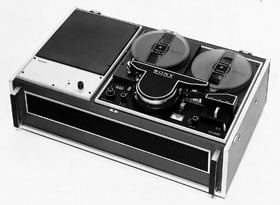 It wasn’t just Sony and Toshiba getting busy with video, they were all it.

JVC came up with quite a few innovations, including the KV-1, the world’s first two-head helical scan VTR in 1959, with a colour version appearing the following year.

By 1963 it had developed the smallest two-head 1-inch VTR with a built in monitor and put together a cartridge format that was the forerunner of the U-Matic video cassette.

The company’s research into colour video led to the widespread adoption of its recording method which separates the colour (chroma – hue and saturation) and luminance (brightness) characteristics of the composite video signal. 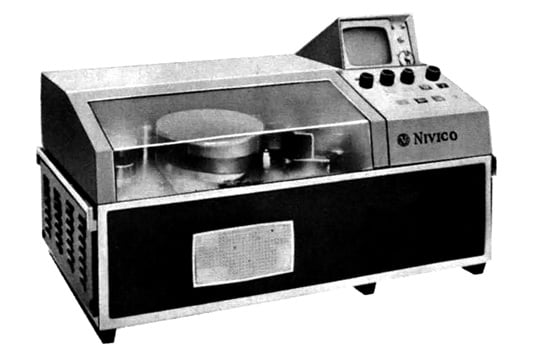 Described as “colour under”, this "down-converting" the colour signal to a lower frequency on record and re-converting it on playback became a standard process on U-Matic, 8mm video, Hi-8, VHS and S-VHS video recorders.

Shall we do the Betamax v VHS wars now or save it for later? OK, we’ll cover it shortly.

Although Sony would be the first to show off a U-Matic prototype in 1969, the format was developed in co-operation with JVC, Matsushita (Panasonic) and a handful of manufacturers outside of Japan. It used 3/4-inch tape and although Sony had hopes for it to become a consumer format, both tapes and recorder were costly and so it had more success with business and institutions. 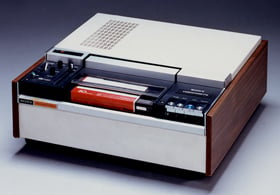 The introduction of Sony’s portable VO-3800 system in 1974 saw U-Matic systems take off with broadcasters who were keen to utilise its instant playback in the field. Previously, film cameras were used which involved the delay of film processing.

The VO-3800 had its quirks though, while it could record in colour, the playback would be monochrome unless an the mains adapter/charger with the colour circuitry on-board was to hand. The idea was to save weight and this arrangement brought the recorder pack down to a mere 30lbs.

U-matic hadn't completely won over the broadcast industry though as the Type C, 1-inch open-reel recorder – another Ampex-Sony collaboration from 1976 – would dominate analogue television production for 20 years because of its high quality output and reliability.

So was Europe asleep during all this time? Had the video effort run out of steam once Auntie’s VERA had spun its last? As far as Philips was concerned, the show had just begun. It had been manufacturing open-reel, rotary head recorders since the mid-1960s which, like its audio equipment, were marketed under the Norelco brand name in the USA. If you speak Dutch, you'll find Marcel's TV Museum, that features vintage video gear that was circulating in Europe, to be well worth a peruse.

Arguably, Philips pioneered the domestic video recorder with the N1500 appearing in 1972. The machine was a cassette-based system where the two spools sat on top of each other providing a slanted tape feed that was ideal for the helical scan recording. These unique square cassettes containing 1/2-inch tape running at 11.26IPS originally had a maximum recording time of only 45 minutes but this was later extended to an hour.

Indeed, it was the recording capacity of the early consumer systems that played a major role in their fate, that and the cost of the video cassette tapes.

Philips’ VCR format certainly wasn’t cheap costing the equivalent of £1.50 a minute in today’s money and the format wasn’t too reliable either, which when you’re spending close to 100 quid for a tape, is going to sting a bit when it gets chewed. Both Grundig and Loewe had a stab at this format too.

Despite the Betamax v VHS war hotting up in Asia and the US, Philips developed a second format that appeared in 1978. The Video Compact Cassette (VCC) that was used in the company’s Video 2000 (V2000) machines had the unique distinction of being two-sided.

You could flip the tape over like an audio cassette and get double the recording time. Initially, the duration was a maximum of 4 hours per side on 1/2-inch tape, amounting to a 1/4-inch video track per side running at 2.44cm/s. The recording capacity would later increase to eight hours per side on some models.

So there you have a neat format with bags of recording time and yet it still didn’t catch on! In many respects it was technically superior to its Betamax and VHS rivals which had appeared before it, and Philips believed the picture quality to be far better too.

The problem this time was the video library rental market and V2000 just didn’t make an impression, with VHS becoming the most widely supported. Another factor being the equipment rental which was still a feature in UK High Streets until around 2000.

Expensive TV and video gear could be leased this way for a monthly fee and many companies had affiliations with brands supporting VHS. And as VHS became more widespread, the tapes became cheaper too.

Over time, rotary head designs proved themselves to work reliably with magnetic tape, but they did require additional considerations for media manufacture. According to Ampex’s Fred Pfost, who was behind those early quadruplex designs, during tests they had noticed playback variations in amplitude and began to wonder if it had anything to do with the 3M 2in tape that was being used. 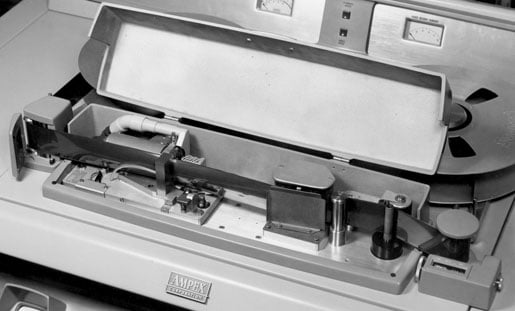 Pondering on this, they finally realised that, as they were using audio tape, it would have gone through a particle alignment process – a magnetisation that occurs once the tape has been coating that is described in part one.

Lining up the needle-like particles suits longitudinal audio recording, but not the transverse rotary head recording the Ampex video recorders were performing. To deal with this issue, Ampex requested 3M ceased providing tape with pre-aligned particles.

It wanted the tape supplied without this orientation process, so a random formulation would result and consequently an improved response from the rotary head. While this did help, at that time Ampex had further work to do on the head orientation and the tape path to attain the image stability it was seeking.

Next page: How to make friends and influence people
Page: