As with digital audio, the arrival of digital video did involve repurposing existing analogue transports and tape formats. Early digital audio stereo mastering would rely on adapted video recorders, the details of which are explained in an earlier El Reg article How digital Audio Ate Itself and the Music Industry (part one).

Likewise, these digitised video formats would also find applications in data storage, which is what these systems had effectively become. A Video8 spin-off known as Data8 was adopted by Exabyte. The use of tape for data storage and its related technical challenges in digital audio recording systems is explored extensively in part two. 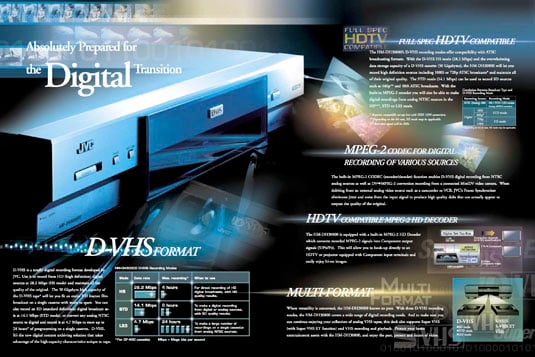 JVC even tried out D-VHS as a way of offering backward-compatibility with analogue tapes. There were D-Theatre pre-recorded D-VHS tapes too with 5.1 Dolby Digital sound and 1080p video resolution. FireWire (iLink) was onboard too, enabling digital transfers. Check out what you were missing in this brochure from 2002 [PDF]. 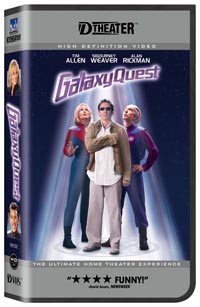 By the mid-1990s, portable digital video formats were in abundance for both professional and consumer use. The DV standard emerged, supported by over 60 companies including Sony. However there were different approaches to data rates and codecs (yet with some interchangeability).

D-1 was introduced by Sony in 1986 and cost a fortune as the colour was stored in component format, which has three separate signals YCBCR where is Y (luminance), CB (Chroma Blue) and CR (Chroma Red) and together they represent the video colour space. It’s a bit more involved than just RGB and in those early days it was handled on equipment prior to the arrival of cheaper and commonplace digital vision mixing desks.

The video cassette used 3/4-inch tape with a maximum recording time of 94 minutes and recording clocked up an amazing 173Mbit/sec data rate.

Ampex saw an opportunity here for a lower cost composite system and worked with Sony and in 1998 announced the D2 3/4-inch format. Not to be outdone, Panasonic introduced its D3 composite rival on 1/2-inch tape in 1991 and in 1994 the company managed its own component system, D5.

Incidentally, D-7 was a compressed component format from Panasonic’s DVCPRO stable and was on 1/4-inch tape. D4 never appeared due to Asian traditions concerning the number four, which when spoken in Chinese sounds similar to the word for death.

The use of tape with helical scan heads again proved itself as a reliable means to store substantial amounts of for television broadcast purposes, but digitally this time. Despite a range of different options for studio and outside broadcast, there was, fortunately, some compatibility between competing digital video cassette systems. However, there was one limiting factor: the tape formulation.

Metal particle (MP) tape was pretty much a refinement of the old science dating back to Pfleumer’s days. Nothing wrong with that, as it has a proven track record – literally. Over the years, tape tech introduced the use of lubricants that are part of the magnetic particle layer that is technically referred to as the pigment.

Much like squeezing a sponge, the pigment releases the lubricating component of its formulation under exertion when travelling over the head and other transport components. When those contact forces subside the lubricant is reabsorbed again, just like releasing a sponge.

Metal Evaporate (ME) tape, also has its lubrication layer, which is added after the tape has had its coating. The tape production processes involved for ME are quite different. Metal vapour clings to the tape base without the need for adhesive binders and a protective coating and lubricant is added later. While the behaviour of the lubricant in the machine is much the same, the tape tension required to get the same effect is lower with ME tapes and needs to be taken into account.

Video cameras were often able to accommodate both formulations – the cassettes would have indentations positioned to identify the tape type and could alter response characteristics, much like switching from a chromium dioxide cassette to a metal one on an audio system. However, there were frequent user reports that tape heads were becoming clogged as a consequence of tape interchange with ME and MP formulations, but this was more likely to do with tension issues. 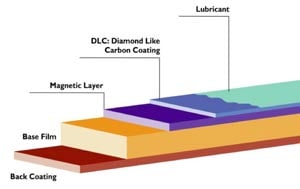 The arguments even led Sony to present a white paper into the issue of clogged heads. The full report, The Truth About Tape Lubricant can be found here [PDF]. From this, it seems Sony was not convinced of the clogged heads theories that had circulated for years, describing it as “hearsay” and “misleading to end users” adding that the DVC tape specification should not cause problems.

However, Sony acknowledged that in years gone by there were numerous ME tape makers and hence a wider variety of lubricants used which may have been a factor. The paper from 2009 goes on to say, “Today there are half as many manufacturers producing metal evaporated tape, hence, the number of different lubricants in use has dropped considerably.”

There are even fewer manufacturers of magnetic tape now and for video, most formats have given way to solid state and hard disk recording alternatives. Still, this does lead to a very real issue regarding tape and one that is worth winding up this subject on.

No doubt we’ve produced enough magnetic tape to wrap around the rings of Saturn a few times and a lot of what has been recorded contains some pretty unique stuff. Indeed, record companies and broadcasters consider trawling their archives as both a moneyspinner and cheap entertainment:

Look what we’ve found, another Beatles demo – kerching. What have we here under this disused Police box? It looks like 100 early episodes of Dr Who and you’d thought they’d been exterminated.

Stuff just keeps turning up and yet no matter what it says on the label, the real value lies in whether it can actually be replayed. With some aforethought, a lot of it can be restored and transferred to yet another medium with its own shelf-life issues.

As recording media goes, tape’s linear playback qualities may seem idiosyncratic these days, but it really does stand the test of time. Yet to say that there is a tape revival would be far from the truth.

However, the revival of magnetic tape from bygone eras dating back over 80 years is an ongoing process that enriches our knowledge, our culture and, indubitably, our entertainment. ®