The KickStarter for the "castAR" technology was launched on Monday by Valve technologists Jeri Ellsworth and Rick Johnson, who are seeking funds to take their invention to market.

The castAR system consists of a set of glasses containing a right-eye projector, left-eye projector, active shutter lenses, and a head-tracker, along with a sheet of retroreflecting material (the sort found in things like hi-vis jackets) and a magic wand that functions as an input device.

The technology works by projecting a stereoscopic 3D image onto the retroreflective surface, which is positioned in front of the wearer and reflects back light to their eyeballs. The kit then uses the integrated camera to track movements at 120Hz and alter the display as the person shifts their head around. This vid shows it in action:

This approach is different to that pioneered by Oculus Rift, which instead uses a head-mounted display to project a stereoscopic image with head-tracking to the user, but it cannot project onto a surface. Some early Oculus Rift users have reported feelings of nausea and headaches when using the VR glasses. Doom creator and graphics expert John Carmack recently took up the role of CTO at Oculus Rift, though, so these problems may be ironed out. 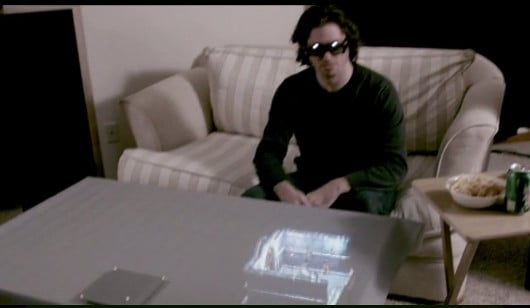 Though the system involves more components than Oculus Rift, such as the retroreflective surface or dedicated "magic wand", the multiple functions afforded by it broaden the range of potential applications: for instance, the retroreflective service comes with an RFID tracking grid underlay which can work in tandem with custom RFID bases stuck onto the underside of board game models. This could let you play Dungeons and Dragons with additional animations and computer-side calculations for things like range and area-of-effect of spells and attacks, they say. It also provides a neat avenue for a range of scientific and education-oriented apps, we reckon.

The inventors have asked for $400,000 to help them convert their prototype technology (in an FPGA chip) into dedicated hardware (using an ASIC that consumes less power as well as a variety of other tricks needed to get the glasses into production). At the time of writing they had already raised $144,000.

But as warm a reception as the technology is getting, it's worth noting that Valve can't have been that impressed with the technology, as though it was developed at the company, an "opportunity presented itself" in early 2013 to let the two inventors acquire the tech and strike out on their own. ®