TAT-1: Call the cable guy, all I see is a beautiful beach

Geek's Guide to Britain A cabled telegram first crossed the Atlantic in 1858, but it took almost a century for voice calls to follow, being carried by the TAT-1 Cable which landed at Oban in Scotland, where we went along to see it.

Back in 1955 a phone call to Canada, or the United States, would require booking several hours in advance as the various radio links required were established – assuming atmospheric conditions allowed the connection to work at all. But on 25 September, 1956, the first voice call crossed the pond from Newfoundland in Canada to Oban in Scotland, landing just here: 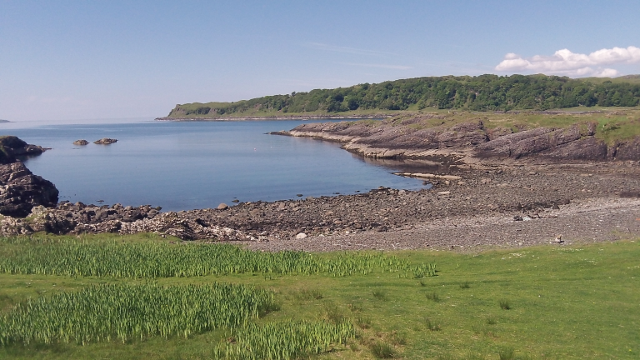 The cable is that concrete thing sticking in the water

The cable carried 35 simultaneous calls, and 22 telegraph lines (squeezed into a 36th voice line), bringing down the cost of calling America to a pound a minute (bought in three-minute chunks) which would be worth about £20 now and compares well to BT's current rate of 45 pence to call the USA.

But TAT-1, as the cable was known, didn't just carry public phone calls, it was also used to send the Queen's Christmas message to the Commonwealth, live, and was a vital segment of the Moscow-Washington hotline, which is why the 100 or so Post Office workers had to sign the Official Secrets act.

Visiting the site of the cable landing isn't trivial. The bay is on the Gallanach Estate, about three miles south of Oban on a road which goes nowhere else, and the concrete housing vanishes entirely at high tide, but we dropped the MacDougalls an email and they were kind enough to let us look around at the point where so many historical phone calls crossed the Atlantic. 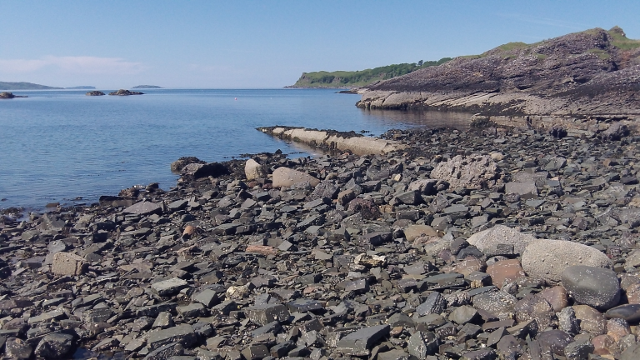 It's bigger than it looks in this picture, but not by much

The concrete housing stretches several metres into the sea, and is wide enough to walk on if a little slippery. There's no evidence of the cable itself, that's long gone, but turning back up the beach the termination building is still standing. 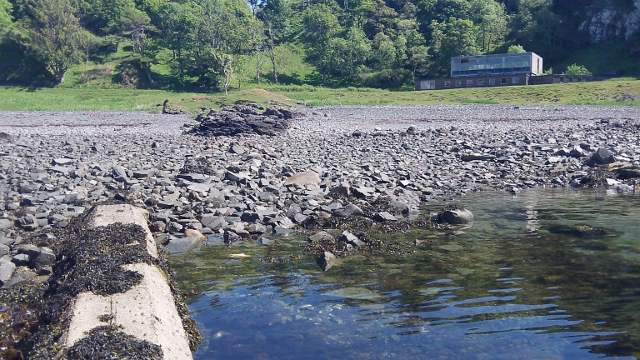 It's not hard to follow the cable up to the building

That building was were the cable connected into the rest of the phone network, continuing down to London as well as onwards to Moscow. That leader-to-leader telex link ran (and still runs, though not using telex and not over TAT-1) from the White House to the Kremlin and was designed to avoid the delays in communication which almost destroyed the world during the Cuban Missile Crisis.

The cable was switched off in 1978, but BT had workers there for another couple of years decommissioning the place, and when they finally left, the estate owner bought the land back along with the building on it.

The building itself is quite dull, and considered unsafe though it's been explored by Derelict Places at their own risk. Mrs MacDougall would like to see it turned into a house, and has clearly given the matter some thought, but current plans only extend to some sort of commemorative plaque recognising its place in history and as an IEEE Milestone.

To see actual cable, one needs to drop into Oban War and Peace Museum in the town centre, where a chunk of cable proudly hangs beside the door along with some photographs and background on the project. 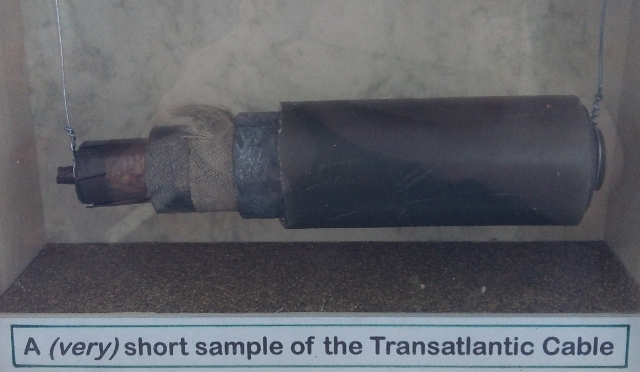 This is the lightweight cable used for the last, and first, 300 miles

It's here we learn that £12.5m was spent on the pair of cables, which were funded by the Canadian Overseas Telecommunications Corporation, the American Telegraph and Telephone Company (AT&T) and the UK Post Office, and that the first year saw 300,000 calls routed across the Atlantic.

The cable isn't central to the museum, which comprises a collection of artefacts with local connections, but there are some photographs of the workers pulling lengths of cable and history around the project.

Proper geeks will also be interested to see photographs of the listening station at Pennyfuir, where submarine transmissions would be intercepted and transcribed before being passed onto Bletchley Park for decoding.

Canadian broadcaster CBC also has some archive material on the cable, including a recording of the first call, between her Maj and the Canadian PM, and a contemporary documentary which includes a delightful conversation between the TV presenter and the then Mrs MacDougall – grandmother to the current estate owner.

It's hard to describe TAT-1 as a great day out for all the family. Get the timing wrong and the cable housing will be beneath the waves, and the museum is fun but won't justify the hundred-mile drive over the mountains, and that's starting from Glasgow!

Which is a shame as it’s a real piece of British technical history, connecting the Commonwealth and ensuring that two world powers could threaten each other with alacrity before they started lobbing bombs.

The museum is free (donations welcome) so anyone travelling up the West coast of Scotland should drop by, and if the weather's good and arrangements allow then the cable itself is well worth a visit if only for the views. 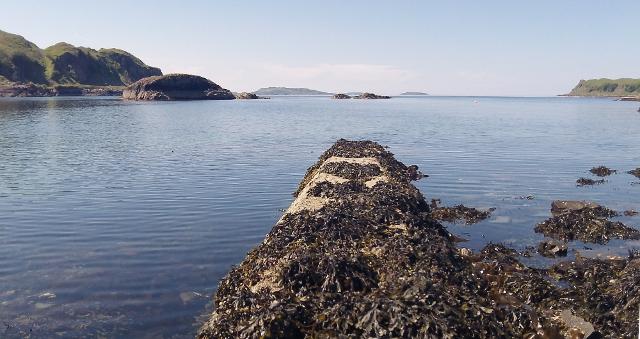 Residents in westernmost municipality of Solund praise new mobile coverage, but others have been left behind
Networks1 Dec 2022 | 17

But why Elon Musk's satellite broadband biz and not govt-funded OneWeb?
Networks1 Dec 2022 | 18