The Nobel prize committee said so

Analysis The lovely thing about this year's Nobel Prize in Economics is that it entirely borks the case for a Robin Hood Tax - a levy on the financial sector's transactions, in other words.

Not that the judging panel's decision will stop efforts to implement the tax; everyone's moved beyond intellectual arguments to instead howl in the wastelands of political tribalism on the subject.

The Nobel Prize in Economics isn't quite a Nobel as it's awarded by the Swedish Central Bank and wasn't part of Nobel's will. But still:

The 2013 Sveriges Riksbank Prize in Economic Sciences in Memory of Alfred Nobel was awarded jointly to Eugene F. Fama, Lars Peter Hansen and Robert J. Shiller "for their empirical analysis of asset prices".

And if you want the long and complex version it's here [PDF].

Rather more fun than reading the trio's work is to think on the question of whether we should have a Robin Hood or financial transactions tax (FTT). It is, after all, something that various eurozone countries voted to bring in, something that we and the Yanks are urged to adopt. Is taxing, say, every stock and bond transaction actually a good idea or not?

I can't say I'm impartial here. My one and only published academic paper is one stating that the FTT is a disaster: that same paper convinced a House of Lords subcommittee [PDF] that it would be too. But leave aside all of the many reasons why I think it would be a seriously cruddy idea and look only at what the implications of the Nobel award are for the idea.

Central to the Robin Hood folks' logic is that there's such a thing as too much financial speculation. They offer us various justifications of this. One is that all the bright people go off to make their fortunes speculating which deprives us of brains in other areas of the economy. Could be; there has to be a reason for MPs after all.

The most important one for their case is that speculation drives prices away from their “real” values as the speculators manipulate them to where they would like them to be at our expense. If we slow this down, if we remove some to all of that froth from the futures and options markets say, then we'll have prices that better accord with reality and thus a better world.

But this Nobel prize-giving suggests the scientific consensus is that this idea is wrong. Not just wrong but diametrically opposed to the reality. Which should, as I say, put the kibosh on the idea if only everyone was considering this tax using only intellectual arguments.

Time for some economics theory

One of the trio, Eugene Fama, is the father of the efficient-markets hypothesis (EMH).

No, this doesn't mean that markets are efficient in the wider sense. It most certainly does not mean that everything should be dealt with by markets because that's the efficient way to do it.

Rather, it says that markets are efficient at processing information to set prices to the "true" value of an investment, meaning that no one can study analyses and consistently win big at the expense of others. 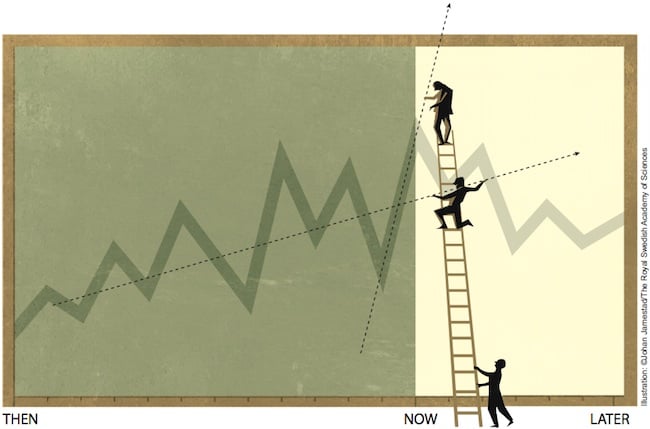 Back to the future ... where will prices go next is the key question. Credit: Johan Jarnestad / The Royal Swedish Academy of Sciences

This efficiency comes in three forms - weak, semi-strong and strong - which describe how information is used to set prices: weak-form says today's prices reflect all previously known market-trading information (such as historical prices) so an investor cannot hope to find and exploit anything mispriced. Semi-strong says all publicly available information is encapsulated in prices so everyone's on a level playing field. And strong is the same as semi-strong except private information is included too.

And the mechanism by which this information is encompassed in prices is that people buy and sell using the information that they have to hand. Thus the final price must represent the interaction of that information available to the participants in the market.

Yeah, I know, seems pretty obvious once explained but much of economics is like that.

From this there are some implications: the first and most basic being that in order to beat the market you must therefore have new information, something not known to other market participants. When you trade on it they'll know that you know something - but you can profit by being the first.

The thing is, us, we out here, just aren't going to have that information. So, we shouldn't try to beat the market because we won't be able to. Indeed, most fund managers won't have the information either so they shouldn't even try. Boring no-fee index funds for the lot of us it should be.

But the second implication is that speculation is the vital lifeblood of said markets. For it is this very thing that brings the information into prices: people buying and selling based upon what they think they know about now and the future. Speculation, far from being the froth that moves us away from “true” values, is the very thing that brings us to those true values.

This is as true of my buying some Royal Mail shares as it is of high-frequency trading, algobots, futures, options and all the rest. It is the very fact that people are trading on their knowledge and opinions that brings prices into line with that available information. How the trading is done, how often, the more efficient it all becomes.

At which point we might want to think about trying to cut the amount of speculation in order to stop prices becoming unhinged from their correct value. And this is the area that Robert Shiller has done a lot of work in. To the point that he actually says that the US housing crash was not caused by too much speculation but by there being too little.

As UK Parliament heads back to in-person voting, select committees are told they can continue working via Zoom

Critics worry mass return to House of Commons is unsafe