Review Laying Dell’s Streak to one side, you can blame Samsung for starting this whole VLP™ business with its 5.3-inch Galaxy Note, which sold in more-than-decent numbers, as much to the surprise of its maker as anyone else, I suspect.

Its successor, the Galaxy Note 2, upped the stakes by featuring a 5.5-inch screen and promptly sold in huge quantities. At the time I called it the “most complete digital communications device known to man”, words I stand by. The moral here? Bigger, as far as Joe Public is concerned at least, is quite clearly better.

So it should come as no surprise that the new Galaxy Note 3 takes things a step further, with a 5.7-inch display, a 2.3GHz quad-core processor and 3GB of RAM. That’s a pretty impressive all-round technical specification but does it make the Note 3 the daddy of VLPs and, more to the point, better than the Sony Xperia Z Ultra? But is it worth twice the price of its Samsung stablemate, the Galaxy Mega 6.3? 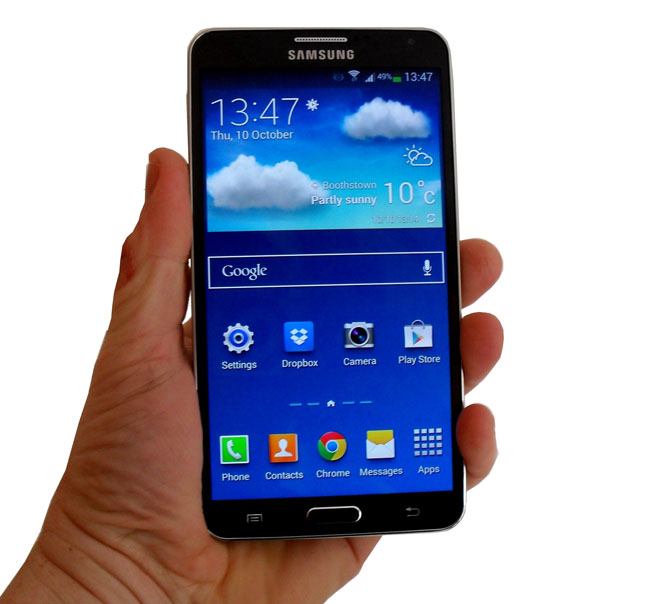 Samsung’s Galaxy Note 3: even bigger screen than before – but not a bigger device

Despite its larger screen, the Note 3 is no wider and even slightly thinner and lighter than its predecessor. This is thanks to a thinner bezel which means more screen in less chassis. It’s still a bit on the large size: 151mm tall, 79mm wide and 8.3mm thick. But it’s noticeably smaller than Sony’s imposing Ultra.

With a certain inevitability, the front of the Note 3 borrows its design cues from the Galaxy S4, complete with chrome-effect speaker grille and silver-edged physical home button. Around the edge is a faux-chrome plastic band which looks just a little tacky to my eyes. At the top you’ll find a 3.5mm headphone jack while the bottom edge houses a USB 3.0 power and data port, a solitary speaker and the stylus slot. 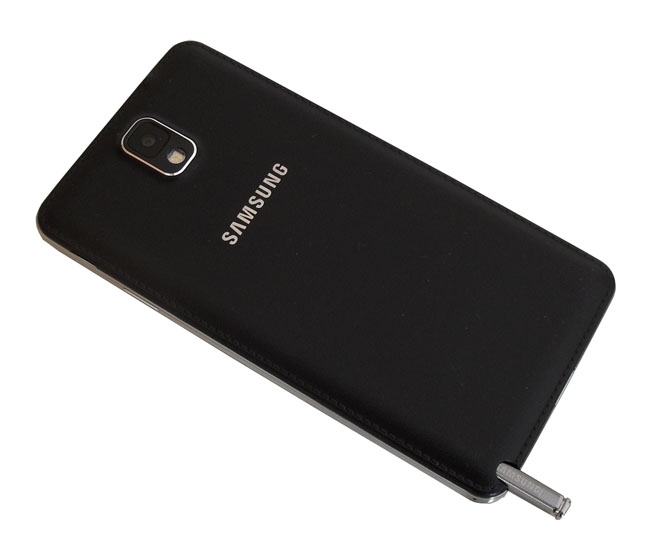 The faux leather back will fool no one

Tucked into the sides are the volume and power buttons but these aren’t as cleverly placed as those on the Z Ultra. The volume rocker is too high to be easily accessible by either thumb or finger no matter which hand you’re holding the device in.

The glossy hyperglaze back of the Note 2 has been replaced with a leather-effect, but still plastic, cover. Make no mistake: it doesn’t feel like leather, though the rubbery texture and fake stitching may fool some folk at first glance. It does make the Note 3 easier to hold than the Note 2 or the Z Ultra, though. But since most Note users seem to swap the standard back panel for a flip cover, this change really makes no odds.

The Note 3’s 5.7-inch display boasts a 1920 x 1080 resolution which is the same as the Galaxy S4 and the Xperia Z Ultra. Given that the Note 3’s screen is larger than the former but smaller than the latter, it has a higher pixel density (386dpi) than the Ultra (344dpi) but a lower one than the S4 (441dpi). The naked eye really can’t tell the difference, though, with even tiny web page text rendering pin-sharp. 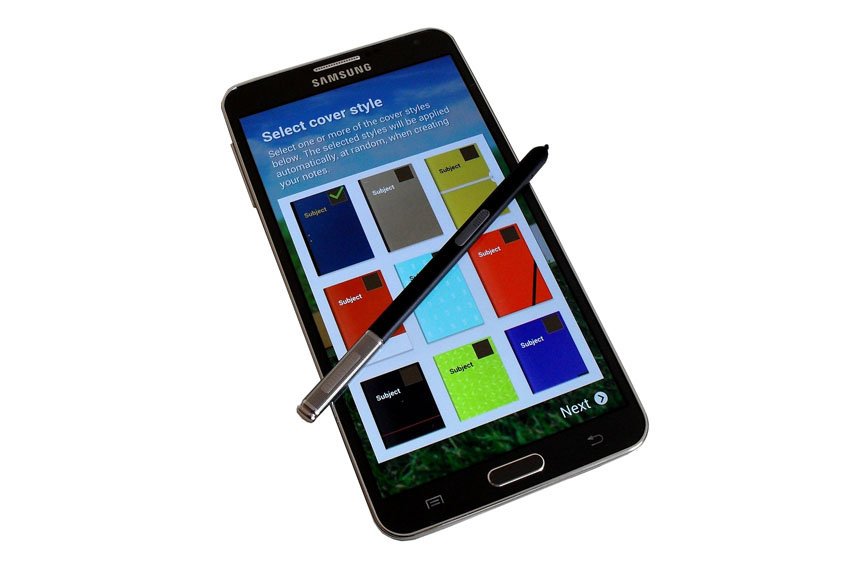 It’s a Note so it comes with a stylus

Videos and images look bold and vivid on the Note 3’s screen thanks to the rich colours and deep blacks of the “Super AMOLED” OLED display Samsung has used. It’s extremely bright and rather garish – at times too garish, which can make some content look over-saturated. There are various screen modes you can choose from to tone things down – though I have to say I prefer the more natural hues of the Z Ultra’s screen.

The Note 3 runs the latest version of Android, 4.3 Jelly Bean. On top of that is Samsung’s TouchWiz overlay, which adds a plethora of extra functions – not least support for the very handy S Pen stylus and the option to run certain apps in windows.

You also get Air gestures, which allows you to swipe above the screen to scroll through images without touching the phablet and the same eye-tracking technology from the S4 that will pause video when you look away from the screen. They’re all features that are fun to play with once or twice but some are not really much more than clever and occasional diversions.

Next page: Android and then some
Page:
Corrections Send us news
106 Comments