'The future of the data centre is memory' – storage firm CEO

Flash array front runner Violin Memory can now run Windows Server inside its high-end arrays, giving the server OS access to up to 64TB of NAND with the ability to run all Windows enterprise applications in solid state storage.

Violin says its 6000 and 6200 series products deliver more than 1 million IOPS and scale from 8TB to 64TB of memory capacity. They have high-availability with sub-second failover and I/O access latency is measured in microseconds.

Violin is selling its 6000 and 6200 series products with the Windows software already installed. Customers can scale up capacity by adding flash modules to the limits supported in each model and scale out capacity and performance by adding more 6000 and 6200 systems. These are linked together across a 40Gbit/s Ethernet network and there is single pane of glass management.

Objective Analysis analyst Jim Handy said: "A data centre with a number of memory nodes with compute capacity should provide significant performance advantages over one in which data must be moved into and out of a number of servers" from networked disk drive, hybrid flash/disk and flash arrays, as network data access latency is removed from the equation with flash arrays as well as disk drive access latency with disk arrays.

Basically any applications that run under Windows Server 2012 R2 will run on these systems, with IO-bound apps benefitting more than CPU-bound apps. View the system as being a pretty standard sized compute mill/RAM combo with a super-humungous amount of NAND bulking out the DRAM.

It claims the systems deliver "the most economical infrastructure for Microsoft-based enterprise clouds." Mainstream server suppliers, such as Dell and HP, could deliver servers bulked out with flash by using PCIe flash cards and software to turn it into a main memory adjunct. They might also use Diablo's Flash DIMMs to accomplish the same aim.

Flash array vendors such as Nimbus Data, Pure Storage and others could add server blades to their arrays and partner with Microsoft as Violin has done. They might all be more attracted to the idea if running VMware servers in their arrays and, no doubt, the ESX engineers inside VMware are looking at the idea already. 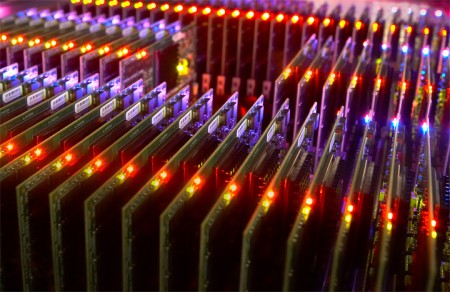 Violin might even be looking at VMware as a future option. By going with Windows and Hyper-V it has the flashed Windows Server market pretty much to itself, at least for a while, and its resellers should be able to present customers with Windows Server hardware that can run far, far more apps per CPU, and bigger apps - big data apps even - than virtually anything else.

There are no benchmark numbers available. Hopefully there will be soon. No pricing has been provided but we're told pricing will be along the lines of the 6000 series pricing. These converged server/flash arrays are currently in an Early Availability state. We should expect GA (general availability) in January 2014. ®

GridIron gobbled up by Violin Memory