A disconnect seems to be emerging between the technologies vendors believe are important in the cloud, and the way traffic is flowing between cloud data centres.

While much is made of a world in which workloads are so virtualised they float around between data centres like quanta teleporting around the world, most of the world's traffic leaves a disk, travels a few feet to a server, hops into a virtual machine, gets munched, and returns home to the disk.

Data centre, traffic, in other words, looks rather like road traffic in meatspace: most cars spend most of their time within a few kilometres of their home base.

There's a growing conviction among vendors that users want their virtual machines to be able to span different data centres – the vendors believe there's a high demand for the ability to pick up a VM workload in Sydney and move it to, say, San Francisco.

But is this supported by the data? Right now, not much: according to Cisco's Global Cloud Index available((PDF) here), just seven per cent of cloud traffic is travelling between data centres, and most of that's for disaster recovery and backup. While live workloads do migrate around the cloud, if Cisco's data is accurate, they don't make up a significant chunk of inter-data-centre traffic. 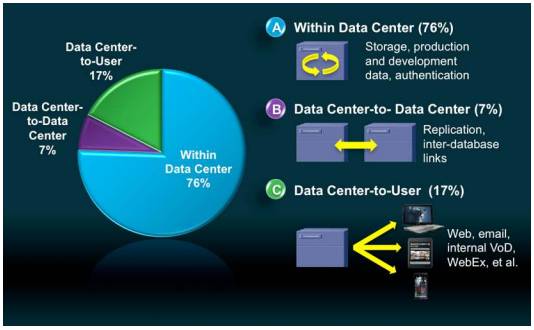 Whence goes your cloud traffic, according to Cisco

Most of the traffic generated by the cloud remains not just in the cloud, but inside single data centres – 76 percent of it, in fact. The remaining 17 per cent of traffic comprises what you and I probably think is the whole point of the cloud: delivering stuff to users.

That puts an interesting cast on the numbers Cisco is presenting for cloud growth. The CAGR of 35 per cent looks relatively muted, even though there are lots of Zettabytes involved – Cisco says the annual 1.8 ZB of cloud data centre traffic predicted for 2013 will grow to 5.3 ZB by 2017. Traffic growth in traditional data centres will be far lower, running at about 12 percent CAGR, Cisco says.

If the distribution of traffic remains unchanged, that extra 3.1 ZB of cloud data centre traffic will contribute just 0.53 ZB to the Internet and private IP WANs. As Cisco notes, the distribution of traffic will be subject to opposing drivers: for example, more video means more traffic being sent to users for less in-DC interactions (since a video has a big file size relative to the smallish database operations needed to manage, locate and transmit it).

This, however, assumes that in-house DC operators will be stick-in-the-mud types who, in 2017, will still be running around the same two-workloads-per-server as they run today. While this is interpreted as a migration of workloads from data centres to the cloud, The Register notes that many of the growing traffic segments (such as consumer video) aren't things that drive traffic in the DC of a bank or insurance company.

The Register notes that there's at least one physical constraint that caps the growth of traffic leaving the DC: the network itself. Akamai's latest State of the Internet report puts the global average connection speed at just 3.3 Mbps. However, even growth in higher-speed broadband will probably be outpaced by what's happening inside the data centres.

Meanwhile, the traffic explosion happening inside the refrigerator won't be bad news for people whose job it is to keep the traffic flowing under their feet: because that's where the real action is. ®