SanDisk's so busy adding up its dosh, enterprise PCIe cards slip into 2014

Flash memory biz SanDisk is on a roll with third quarter revenues and income up on both annual and sequential compares.

The financials chart shows a rising trend for the past three quarters, and a full-year revenue in excess of $5.5bn must be in prospect. 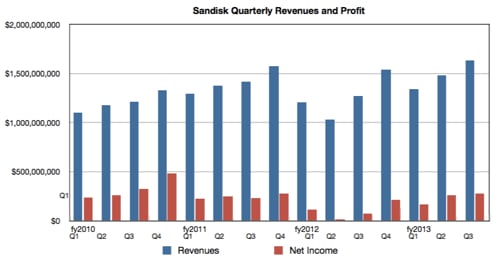 Company president and CEO Sanjay Mehrotra said in an earnings call with analysts: "Our excellent third quarter achievements keep us on track to deliver record 2013 results." More on this in a moment.

We have determined that SMART Storage Systems' Enterprise SSD product architecture is more scalable than our existing platform with significant headroom to drive new features and higher levels of performance and endurance that our Enterprise customers require. Therefore, we plan to implement the [SMART] Guardian Technology into more of the Enterprise products in our roadmap.

Investment outfit Stifel Nicolaus' managing director Aaron Rakers noted: "SanDisk is writing off some of the intellectual property-related intangibles from the Pliant acquisition."

Rakers noted: "SanDisk reported that it has commenced sample shipments of its enterprise-class UltraDIMM solutions with OEMs."

Mehrotra admitted "the expected launch of our 12Gbit SAS SSD product will be delayed"; the launch is now expected in mid-2014. Rakers said enterprise-class PCIe hardware is also being pushed out to some time in 2014. No reasons were given for these delays.

The introduction schedule for the 3D BICS flash technology will go into pilot production in 2015 and ramp for volume manufacture in 2016.

SanDisk has started paying out dividends to shareholders and repurchasing stock to inflate the share price. It's quietly confident about the next fiscal year as well as this one. Fourth quarter revenue is estimated be $1.675bn at the mid-point, providing as much as $6.12bn full-year sales; that's a billion bucks - about 20 per cent more - more than last year's $5.1bn. ®