Windows 8.1: A bit square, sure, but WAIT! It has a Start button

New features just underline the sins of omission in Windows 8.0

Review Windows 8.1 adds a layer of polish to the previous release, Windows 8, and fixes various annoyances. But has Microsoft done enough to rescue its OS against a background of plummeting PC sales and unimpressed customers who want Windows 7 back?

Discussion of Windows 8.1 tends to focus on the Start screen and revived Start button. This is not just a cosmetic change. Start has been "reconceived" in Windows 8.1, and the main tiled screen is now an easily customised favourites panel instead of being the sole launch menu.

By no coincidence, it is more like the Windows Phone user interface, where you pin your favourites to the main screen and access all apps by swiping your finger right. In Windows 8.1 you swipe down instead of right, or click the down arrow.

Tiles can be small too, so you can now have a huge number to view without scrolling if you wish, though small tiles have no captions.

It is a mistake, though, to concentrate on Start - especially as many users tell me they rarely use the Start screen, with the taskbar along with desktop shortcuts handling the applications they use most often.

More instructive is to look at what Microsoft is bringing out in the companion operating system to Windows 8.1 – Windows Server 2012 R2 and the PC and server management suite System Center 2012 R2 – and how this relates to Windows 8.1. These are due to be released on Friday.

A number of business-oriented features are now exclusive to Windows 8.1 or, in some cases, third-party devices running Apple iOS or Android. They do not work on Windows 7.

These features include workplace join, which identifies a device in Microsoft’s Active Directory without full domain join; work folders, which synchronise work documents stored in a user’s directory on the server; and selective wipe, which removes company apps and makes their data inaccessible.

If administrators require encryption on work folders, selective wipe makes the data there unreadable as well. Windows 8 is also required if you want the controversial UEFI (Unified Extensible Firmware Interface) Secure Boot, which will only load signed drivers at boot, making it harder for malware to load.

Windows Store apps are inherently more manageable than desktop applications, since they are isolated from one another and from the operating system. Microsoft’s aim is to reposition Windows 8 as a device operating system, with these business-oriented features working alongside the new touch-friendly user interface.

The recent deal announced with Delta Air Lines, rolling out 11,000 Surface 2 Windows RT (yes, the ARM version) to pilots, shows how this can work. 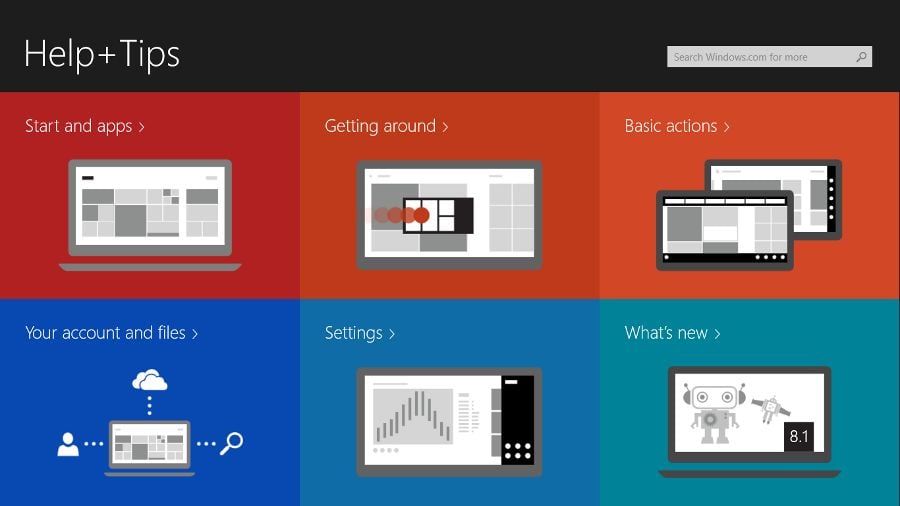 There are signs too that Microsoft’s OEM partners are beginning to make sense of Windows 8. Talking to Toshiba at a trade show, I discovered – to no surprise – that the first wave of hybrid laptops with twisty screens had flopped, being too heavy and awkward to work as tablets, and too expensive to appeal as laptops. The new wave of devices has removable keyboards, more in the style of Surface. They work well as tablets, with the keyboard as a backup option when you need it.

None of this is any comfort to existing Windows desktop users who just want to get on their work and find that the Windows 8 user interface changes get in the way. That said, Windows 8.1 is an easier transition.

The restored Start button on the desktop is excellent for keyboard and mouse users, not just for getting to the menu, but also for its right-click administrative options, including Shutdown. Whereas only the boldest system administrator would roll out Windows 8.0, Windows 8.1 with boot to desktop enabled is not likely to be too painful. Microsoft even has a Help and Tips app that is a rather good introduction; why this kind of thing was not in the first release is a mystery.

Despite these improvements, Microsoft’s problems with Windows 8 are not over. One of the incongruities is that most of the effort has gone into the Windows Runtime and the tablet-friendly user interface, whereas users live mostly on the desktop, since there are so few compelling Windows Store apps.