11m Chinese engulfed by 'Airpocalypse' at 4000% of safe pollution levels

Video A choking cloud of air pollution 4,000 per cent as dangerous as the World Health Organization's recommendation of daily airborne particulate exposure has virtually shut down one of northeastern China's most populous cities. 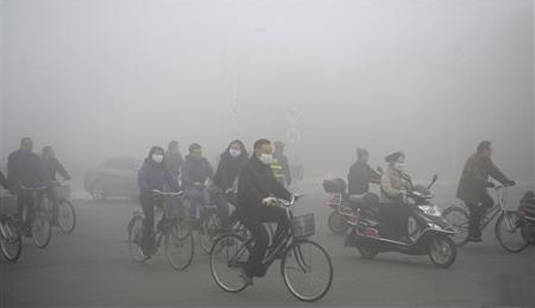 No, it's not a foggy day in Harbin town – that's lung-killing particulate matter clouding the air

On Monday, Harbin – the capital and largest city in Heilongjiang province – was engulfed by an "airpocalypse" of fine particulate matter known as PM2.5, with readings as high as 1,000 micrograms per cubic meter in some parts of the metro area of 11 million souls, Reuters reports. The WHO's recommendation [PDF] for 24-hour PM2.5 exposure is 25 µg/m3.

PM2.5 is particularly nasty stuff. As the US Environmental Protection Agency explains:

Particles less than 10 micrometers in diameter (PM10) pose a health concern because they can be inhaled into and accumulate in the respiratory system. Particles less than 2.5 micrometers in diameter (PM2.5) are referred to as "fine" particles and are believed to pose the greatest health risks. Because of their small size (approximately 1/30th the average width of a human hair), fine particles can lodge deeply into the lungs.

Being in northeastern China, Harbin can be bitingly cold – one of its nicknames, in fact, is "Ice City" – and according to Reuters, China's official Xinhua news agency indirectly blamed the airpocalypse on the cold, saying that the massive pollution was caused by residents and the local government firing up their heating systems for the first time this winter.

Whatever the proximate cause, the surge of PM2.5 has brought the city to a near standstill – schools have suspended classes, the airport has shut down, and traffic has snarled as the cloud of pollution reduced visibility to as low as 10 meters, as the video below shows.

China's massive air-pollution problem is not only a health hazard, it is also causing rising resentment towards government among its citizens. As Reuters points out, "Domestic media have run stories describing the expensive air purifiers government officials enjoy in their homes and offices."

This July, the Chinese government announced a $227bn Airborne Pollution Prevention and Control Action Plan to run from 2013 through 2017, with the goal of reducing air pollution by 25 per cent from 2012 levels. That effort, however, will focus on Beijing – which suffered its own airpocalypse in January – along with Tianjin and the adjacent Hebei province.

Harbin, however, is over 700 miles to the northeast from Beijing and Tianjin, and is suffering from its own locally produced plague of PM2.5. If China's leaders want to keep their 1.3 billion citizens from suffocating not only from airborne particulate but also from anger, that $227bn will be merely a down payment.

Or they could just outlaw heat. ®