It's long been known that texturing the surface of solar cells can help them retain light and get more efficient. Now, a group of researchers led by Imperial College, London, has found that nano-scale aluminium “studs” on a cell's surface can improve its light-gathering by as much as 22 percent.

As Dr Nicholas Hylton, of Imperial College London's Department of Physics, explains: “As the absorbing material alone can make up half the cost of a solar panel our aim has been to reduce to a minimum the amount that is needed”.

The 100-nanometre rows of aluminium cylinders were attached to the top of the solar panel in an arrangement not unlike Lego. This structure helps reflect and trap individual rays of light in the absorbing material for longer, extracting more energy from the light. 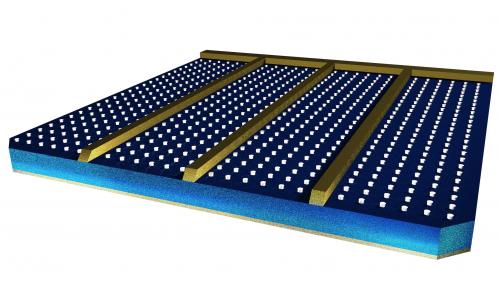 Similar effects have been seen with microstructures of silver or gold, but Dr Hylton told Phys.org aluminium is both cheaper than those metals, and has a better interaction with light.

“Gold and silver both have a strong effect on passing light rays, which can penetrate into the tiny studs and be absorbed, whereas aluminium has a different interaction and merely bends and scatters light as it travels past them into the solar cells,” he said. ®

Industrial systems' security got 99 problems and CVEs are one. Or more
Research3 Jul 2022 | 41