There is a new range-topper for Exagrid's deduplicating backup to disk arrays, the EX21000E.

Backup data keeps on growing so backup to disk systems have to grow their capacity and speed so as to able to deal with the amount of backup data in the time window available.

Exagrid arrays can be pooled in a grid of 10 machines with global post-process deduplication, central management, and load balancing. Grids can be combined to reach a grand total backup capacity of 4PB.

There are three "E" modes layered above them:

There is an Exagrid product comparison doc. Here's a table from it listing the products' raw and usable capacities and more: 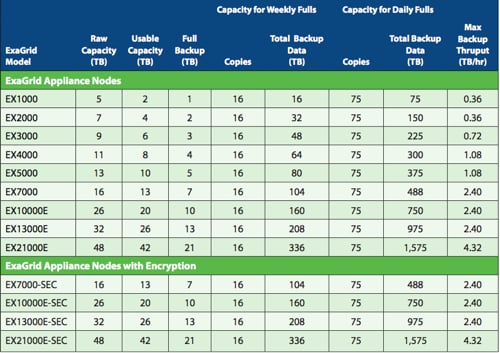 You can get copies of these reports from here (PDF) with registration required.

The EX21000E is available now and can be added to existing grids, mixing and matching with other Exagrid models. ®

In the table above we've noted that the EX7000 is rated by Exagrid as being able to store 16 weekly full backups with 104TB of total backup data, each of 7TB capacity, using its 16TB of raw capacity and 13TB of usable capacity.