It's NOT an iPad - but that's FINE: I learned to LOVE Microsoft's Surface 2

Review Microsoft’s first take on Surface RT was a disaster, culminating in a $900m stock write-down in July.

Curious then that the company has now produced the Surface 2 with a similar design, and also running Windows RT, the locked-down ARM build on which you cannot install desktop applications – only new-style apps from the Windows Store.

What has changed to make this any less of a failure in the market?

The situation bears closer examination. Surface RT was not just a new device, it was Microsoft’s first own-brand PC and in part a challenge to its computer-manufacturing partners. Surface RT, and its follow-up companion Surface Pro, are machines designed with more care and innovation than most PCs, and offer a clever solution to the Windows 8 problem: how to work well both as a tablet and with a keyboard and mouse pointer.

The original Surface RT was too expensive for its target market, the app ecosystem too lacking, performance too slow, and too many were manufactured. Fundamentally though, it is an elegant design, particularly in conjunction with its detachable keyboard covers, which fold back unobtrusively for tablet use. Can a revamped Surface RT succeed where its predecessor failed?

Just to remind you, Surface 2 is a 10.6-inch widescreen tablet 9.4mm thick and weighing 676g. It runs the just-released Windows 8.1 and comes with a special version of Microsoft Office 2013, including Outlook, Word, Excel, PowerPoint and OneNote.

Surface 2 has an Nvidia Tegra 4 chipset, still a quad-core design but with 72 GPU cores versus the 12 on the Tegra 3 in the Surface RT, and ARM Cortex-A15 processor running at 1.71GHz versus the earlier Cortex-A9 at 1.3GHz.

The real-world speed difference is substantial. On the Sunspider Javascript benchmark, Surface 2 achieves about 390ms versus 920ms for the older model (The Intel-powered Surface Pro 2 gets 115ms). Pinball FX2, which was too laggy to play on Surface RT, is fine to play on Surface 2 though there is still a hint of lag.

An Excel spreadsheet full of formulae is irritatingly slow when entering data on Surface RT, but the same worksheet is perfectly responsive on Surface 2.

The screen on Surface 2 is 1080p, 1920 by 1080, with five-point multi-touch. It is responsive and sharp and generally looks great. A HDMI output is provided for an external video display.

A single USB 3.0 port gives access to fast external storage or other devices, and there is a microSD slot tucked under the built-in kickstand. Bluetooth 4.0 is supported along with Wi-Fi, but there is no mobile network provision. 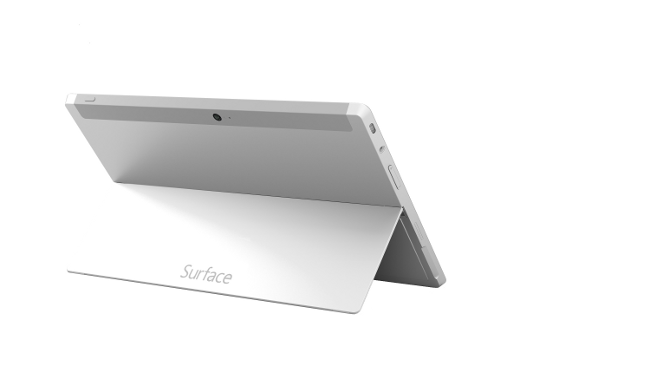 There is a rear-facing 5.0-megapixel camera and 3.5-megapixel front-facing cam – better than the 720p cameras on Surface RT – and the results look far less grainy.

What about Windows 8.1 on Surface 2? The most significant change is not the restored Start button nor the ability to resize app windows as you like, but that Outlook is now part of the bundled Office 2013 in the 8.1 build for Surface. Despite improvements in the Mail app, Outlook is critical for users of Exchange or Office 365, although note you can also now upgrade Surface RT and get the same benefit.

Cloud-backed storage system SkyDrive in Windows 8.1 downloads documents on demand, which means that provided you are online, plenty of virtual disk space is available. Microsoft bundles Surface 2 with 200GB of SkyDrive storage for two years to make the point.

The Surface 2 power supply still uses an awkward proprietary connector rather than the USB power that users would prefer. The magnetic jack is still fiddly though slightly improved and much stronger once in place. Battery life is quoted at 10 hours and the recharge time taking 2 to 4 hours, though I have not had the unit long enough to test this.

Microsoft’s revised Touch 2 keyboard cover deserves mention. The first touch cover was in theory the best feature of the original Surface, since unlike the Type cover, which has real keys, the Touch cover is nearly flat and feels natural when folded behind for tablet use (this action also disables the keys). The new Touch cover has 14 times as many sensors, according to Microsoft, and is slightly thinner, 2.5mm as opposed to 3mm. It is also backlit.