If you want Nvidia discrete graphics, go for the 15-incher

The new iPad Air and iPad mini with Retina display weren't the only bits of Apple kit that were revealed at Tuesday's product rollout in San Francisco; there were also upgraded versions of the 13-inch and 15-inch Retina display MacBook Pros to talk about.

The most notable upgrade to the laptops is their processors. The 13-inch model now comes standard with a dual-core 2.4GHz Intel fourth-generation Core i5 processor, née "Haswell", while the 15-incher's base-model processor is a four-core 2.0GHz Haswell Core i7. The smaller model can be upgraded to a dual-core 2.6GHz dual-core Intel Core i5, and the larger to a quad-core 2.3GHz Intel Core i7. 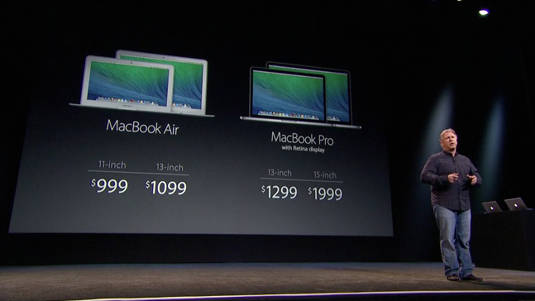 Apple's marketing lead Phil Schiller, speaking at the rollout event, claims that the 13-inch model now gets up to nine hours battery life. "So if you're a fan of The Black Knight as I am, you can watch the entire trilogy on one charge," he said. The 15-incher's battery life is rated at eight hours.