We don't need no STEEENKING BATTERIES

Scientists at Vanderbilt University have created a silicon-based supercapacitor they say could scale all the way from grid-level storage down to consumer electronics.

The reason they're trumpeting it as a breakthrough is that silicon, while abundant and with well-established fabrication techniques, doesn't work well in capacitors (or as the authors describe it in their paper, available in full at Nature, “double-layer charge storage”). Its highly reactive nature makes it much better as an anode in a metal-ion battery, they write; in supercapacitors “it reacts readily with some of chemicals in the electrolytes that provide the ions that store the electrical charge”.

As noted in this university press release: “Instead of storing energy in chemical reactions the way batteries do, “supercaps” store electricity by assembling ions on the surface of a porous material. As a result, they tend to charge and discharge in minutes, instead of hours, and operate for a few million cycles, instead of a few thousand cycles like batteries”.

To do this in silicon, the researchers used porous silicon, created by etching the surface of a silicon wafer. To combat the reactivity of the silicon, they then coated the surface with carbon, baked at between 600 and 700°C. The result was a graphene surface coating created at far lower than the 1400°C-plus temperatures used to create graphene. 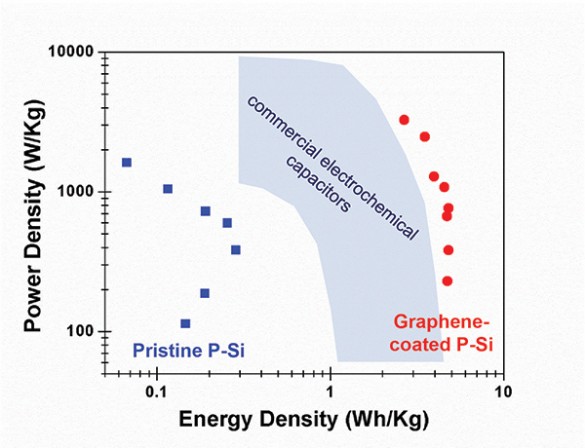 The graphene coating both stabilised the surface of the silicon, and allowed them to construct a supercapacitor with energy densities “over two orders of magnitude” better than uncoated porous silicon, “and significantly better than commercial supercapacitors.”

Research leader Cary Pint believes the approach could allow unused silicon on wafers to become the power source for devices like mobile phones. At a larger scale, supercapacitors could be built onto the back of solar cells, again using otherwise-unused silicon. ®