And Levy recalls that the mood among the Enterprise development team members was “extremely positive with absolutely enormous enthusiasm, engendered by Robert Madge and his desire to produce the best we possibly could”.

And then the proverbial hit the flan. Six weeks before the Enterprise was due to ship, Elan announced it was changing its name, again. Though the company had been calling itself Elan since mid-1983, it now discovered that “the name Elan has been registered by another company here and overseas”, marketing chief Mike Shirley was forced to admit. The replacement name? Flan. “The change from Elan to Flan was the easiest for us to do,” said Shirley. “Some people have been calling it the Flan computer anyway.” 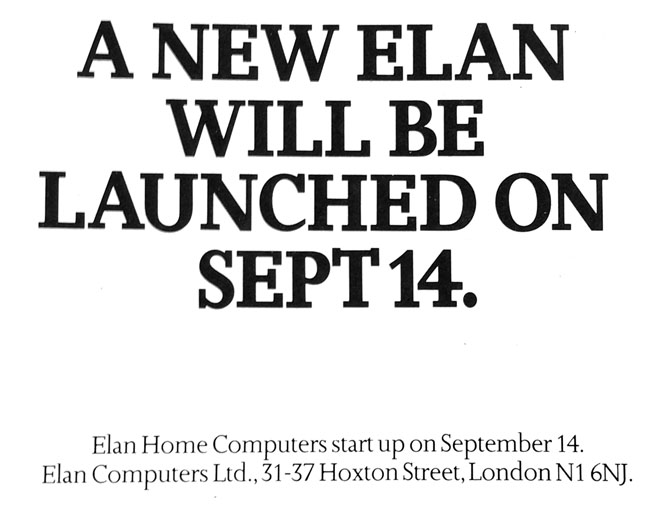 How the first name change had been announced, in July 1983

You can understand Shirley trying to make light of the change. And ‘Elan’ could easily be changed to ‘Flan’ by erasing the lower bar of the capital E on the litho and screen-printing masters used to stamp the name on the machine and print the box artwork and documentation. It would be less costly than rebranding the machine entirely.

But it quickly became clear that that’s exactly what the company should have done. The company and its computer became, for a month at least, the laughing stock of the UK home computer business as magazine after magazine cracked egg tart gags.

In fact, Elan Digital Systems of Crawley, Surrey had successfully taken out an injunction against Elan Computers in December 1983 to prevent it using the name "Elan" for computer products. The Enterprise maker appealed against the court’s decision but the judgement was allowed to stand. Yet another new name would be required.

Worse, the company also had to put the release of the computer back to September 1984 - a full year after launch - because the machine was taking longer to get right than the development team had expected: specifically the custom Nick and Dave ASICs. Work on these was “going painstakingly”, said Mike Shirley at the time. “We want to produce a trouble-free product and one that is available in enough numbers to satisfy initial demand,” he insisted. “We have talked extensively with the retail trade who would rather see a fully debugged model appear in September in time for the Christmas rush.”

It wouldn’t take that long to come up with a fresh moniker, at least. Taking a cue from the company’s computer, Elan renamed itself Enterprise Computers. Intelligent Software continued to work on EXOS, EXDOS - the Enterprise disk system - and IS Basic. EXOS was updated to version 2.0 in October or November 1984, and reached its (final?) version, 2.1, early in 1985. Industrial designer Geoff Hollington had long since finished off the designs for the plug-on Enterprise memory expansion modules, its software cartridges, and housings for single and twin floppy drive units.

Meanwhile, increasing component costs meant the 64KB model would now cost £228.95, up from £199. The 128KB Enterprise would now not arrive until early 1985. Actually, neither would the 64KB version. By September 1984, Enterprise was telling its retail partners not to expect its first computers until early the following year. “We hope to be out this autumn but we want to make sure that the product is fully debugged first,” company spokeswoman Caroline Jones told Popular Computing Weekly, though it was the same line the firm had trotted out before. “At the moment we cannot say how many machines will be available this Christmas.”

In the same story Bob Denton, head of retail chain Prism, claimed he’d been told the Enterprise would finally be able to be put on sale in January 1985. To be fair, Enterprise does appear to have managed to get some units out before Christmas 1984, but these were just pre-production machines for magazine reviewers and software developers. Shirley admitted full production wouldn’t be reached, in any case, until February 1985. By now Enterprise had changed manufacturing partners, from Welwyn Electronics of Tyneside to GRI Electronics, which was based in Perth, Scotland.

“We intend to sell at least 150,000 machines in the UK in 1985 and are fully geared to produce more if the demand is there,” Enterprise promised potential software developer partners in November 1984. “Our overseas distributor network, already established in over 20 key international markets, will account for a further 100,000 plus machines in 1985.”

The plan would also involve “mounting the most intensive home computer [marketing] campaign ever - to create demand and maintain it”, the company pledged. It said £500,000 would be spent during Q1 on “a tightly targeted TV advertising campaign” featuring a 40-second commercial, “plus continuous double-page colour insertions in the key specialist computer publications”. Some £2 million had been earmarked for advertising throughout 1985, the firm insisted, “the vast majority of which will be spent on TV”.

The ad was an early commercial work by Aardman Animations, best known now for Peter Gabriel’s Sledgehammer music video and the Wallace and Gromit films. When the Enterprise 128 came out, the ad was re-voiced by Matt "Max Headroom" Frewer.

Yet it would be an unimpressive debut. Having taken so long to ship developer machines, at launch there was only the software Intelligent had produced: a set of four games tapes, all written in Basic not machine code. However, faster games were promised to arrive soon after, along with more IS-sourced product, including an assembler/disassembler package, versions of the Lisp and Forth languages, and - inevitably - a chess program. Enterprise said popular software houses Quicksilva and Mikro-Gen had committed themselves to supporting the now not-so-new micro.