Meanwhile, reviews written on the back of evaluation time with the late-1984 pre-production machines began to appear.

“With its black, green, blue and red colour scheme, joystick and external heat sink, the machine looks rather futuristic and toy-like at a time when the trend in the home is towards more professional units,” wrote Personal Computer World’s Nick Walker. Stuart Cooke in Personal Computer News (PCN) agreed that it was “extremely futuristic”.

Opening the Enterprise, noted Walker, required the removal of 14 screws and revealed “a single, somewhat cramped motherboard” taking up just two-thirds, perhaps, of the interior area and featuring the Z80A, Nick and Dave chips, and 64KB of DRAM arranged in “a bank of eight 8KB chips”.

The keyboard “is exactly the same type as the much criticised keyboard on the Sinclair QL. Unlike the QL keyboard, this one is actually quite good to use, even if the first touch does make you cringe”, wrote Cooke in PCN.

He also praised the eight function keys, which “can be used with the Shift, Control and Alt keys [so] there are actually 32 available”, as did Walker, who found the keyboard itself “slushy” and in need of the key-press beep sent through the Enterprise’s on-board speaker.

“First impression of the Basic is that it is extremely long winded,” said Cooke. “Most versions of Basic now use abbreviations for their command words. Enterprise, however, has gone back a few years and, just as with Cobol, everything has to be typed out in full - CLS has been replaced with CLEAR SCREEN.” But he admitted that “this does have one good thing going for it: programs are extremely readable”.

Nick Walker liked how, “using the SET statement it is possible to configure a very wide range of machine, video and sound options such as the size of the editor buffer or redefinition of the character set”.

He was also impressed that “it is possible to have a number of [Basic] programs in memory simultaneously, each with its own local variables and line numbers... parameters can be passed from one program to another”.

“The Enterprise is actually a nice machine for programming on,” said Cooke. “Line syntax is checked whenever a key is pressed so you don’t have to wait until a program is run before you find you’ve made an error. Correction of a line is made very simple by the inclusion of a full-screen editor under the control of the joystick. If an error is present on a line, you simply zip the cursor up to the offending error, insert or delete using the keys to the top right of the keyboard and then hit Return.” 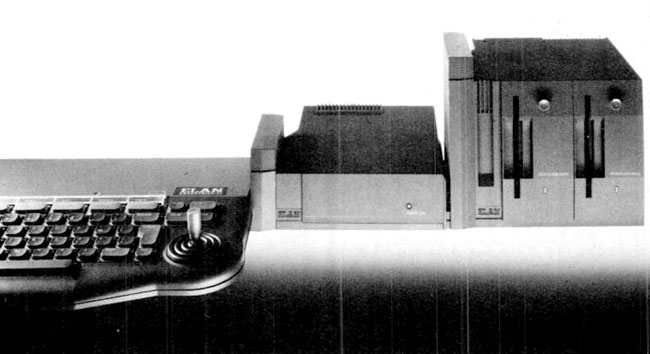 Despite the four-voice power of the sound chip, Dave, the Enterprise didn’t output sound through the connected TV but through its built-in speaker. “This gives a sound quality more reminiscent of the beeper on the Spectrum than a four-channel synthesiser,” grumbled Cooke. “The only way to get decent sound out of it is to plug the output into your hi-fi.” And yet, he said, the stereo output was pumped through the cassette output socket. The result: you can play sound loud, or write data to tape, but not both at the same time - “you will have to keep swapping the plugs at the rear of the machine”.

Nick Walker thought Dave “certainly on a par with the BBC or Commodore 64, the current ‘kings’ of sound”.

“One extremely nice touch,” added Cooke, “is the level meter which appears at the top of the screen when loading [a program from cassette]. This consists of a green and red block. When the green block is lit, the load is going OK; if the red block is lit, your cassette volume needs to be adjusted.”

All good stuff, but out too late. “A year ago, the Enterprise would have stood out as a market leader... At the time it was thought to be the greatest thing to happen since the invention of the microchip...” judged PCN. “Today, with Sinclair, Acorn and Commodore and perhaps MSX all becoming household names, it will probably have a much harder time making an impact.”

PCW agreed, but at least felt able to say “the Enterprise is still ahead of the field in terms of technical specification” and sported a “structured Basic [and a] nicely designed operating system”, but reckoned the competition offered by the QL and the Amstrad CPC 464 would cause it great hardship. “The machine’s idiosyncratic styling and non-standard ports are also drawbacks.”

The delays would come at tremendous cost. Combined with the downturn in the UK home computer market, Enterprise now found it impossible to persuade big name retailers to put its micro on their shelves. Without the high-profile High Street presence this would have ensured, independent retailers were none too keen to sell the Enterprise either.

Next page: The cost of the delays
Page: