The cost of the delays

Reducing the price of the 64KB machine to £180 alongside the June 1985 launch of the 128KB model, now priced at £250, didn’t help much, especially when Enterprise’s price list stretched to just 30 software packages. Offering a tool to convert Spectrum Basic programs didn’t win many converts to the Enterprise, either. This down-the-line lack of punter and reseller interest eventually prompted Enterprise’s distributor, Terry Blood Distribution (TBD), to drop the product toward the end of the year. 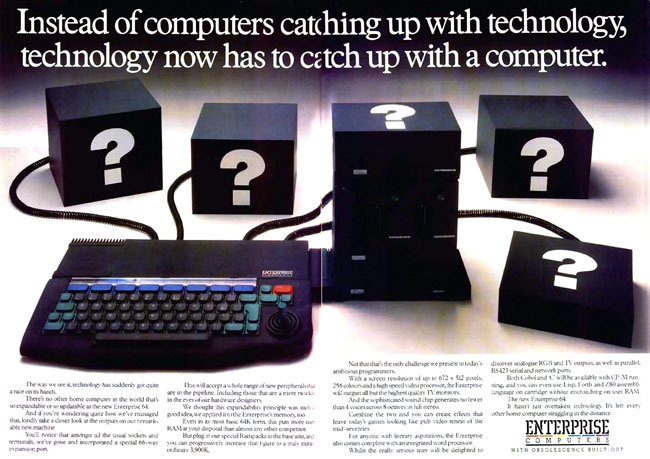 Advertising the Enterprise in print
Click for larger image

Enterprise tried to persuade it to reconsider. It promised new kit for 1986, but with sales slow, it wasn’t able to fund the aggressive product development programme it was promising. The Enterprise had built up a fanbase and garnered decent reviews but it was unable to break into the mainstream. Had its computer shipped in 1983, it would have had a tough enough time, but at least the Enterprise was, back then, well specced - “miles ahead of the competition”, PCN had said. However, 18 months to two years on, it was no longer the leap ahead it had once seemed.

During 1986, Enterprise attempted to interest Dixons in an alternative to Amstrad’s PCW8256 word processor, called the PC360. It was unable to persuade the retailer to take the machine.

According to David Levy, Mike Shirley and Deepak Mirpuri made a last-ditch attempt to persuade Greens, a retail chain, to take 20,000 units. Greens’ buyer was interested but only if the machines could be sold to him at a “more aggressive price” than Enterprise had originally offered. Shirley and Mirpuri approached company Chairman Lachu Mahtani, who held the purse strings. Still sure that the Enterprise was a premium product he refused to allow the negotiators to accept the lower unit price.

A “fatal” error, says Levy. Mahtani soon relented, but by now Greens’ buyer had lost interest. Had the deal been struck, says Levy, it might have saved the company - or at least kept it going to bring new, more relevanmt products to market. But by June 1986, Enterprise’s endeavours had racked up debts estimated at more than £8m. It could not continue.

The receiver was called in. But with little appetite for the company or its technology - or, indeed, the Z80-based CP/M machine, codenamed Vulcan, it had in the labs as a successor to the Enterprise - there was little choice but to liquidate the business. That was it for the UK, though Enterprise’s partner in Germany continued to offer the machine, peripherals and software into the early 1990s, selling the kit left behind by its liquidated parent. It wasn’t too hard for Enterprise buffs to import machines back into the UK. 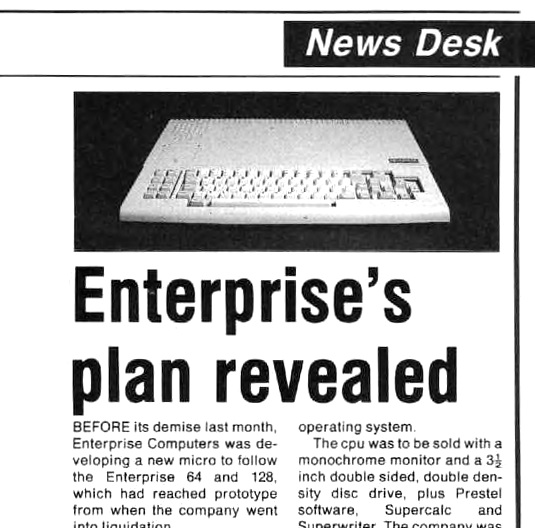 The business Enterprise that never made it: Vulcan

Despite Enterprise’s grand plans, an online catalogue of micro serial number suggests fewer than 70,000 Enterprise computers were produced, the vast majority of them - those with five-digit serial numbers - being 128KB machines, most of which went overseas.

After the collapse of Enterprise, Technical Director Robert Madge went on to found Madge Networks, which focused on the development of high-speed networking hardware based on the IBM-developed Token Ring protocol. The new company experienced stratospheric growth during the late 1980s and 1990s on the back of businesses’ growing keenness to connect their personal computers to servers, and to connect premises across telecoms networks using technology like ISDN.

Madge Networks proved itself able to compete with Token Ring’s main proponent, IBM. But shifting the company to the US, and a move to rid itself of its Ethernet business, turned out to be the wrong decisions, and Madge Networks declined before eventually going bust in 2003. It lives on now as Madge Ltd. Robert Madge left in 2001. These days he is involved in a number of Malaysian technology ventures.

Enterprise’s failure also hit Intelligent Software hard. IS was one of Enterprise’s biggest creditors and without the prospect of being paid for its work, it collapsed too. David Levy continues to take a close interest in the world’s of chess and machine intelligence, and still writes extensively on the subject and to lead the International Computer Games Association (ICGA).

In 2001, he formed Intelligent Toys to create software able to converse realistically with people - and netted the 2009 Loebner Prize, which judges submitted code on its ability to chatter away like a human.

Geoff Hollington went on to do design work in the hi-tech office furniture sector, and product design for the likes of Kodak and Parker Pens. He currently runs his own agency and is an External Examiner for the Royal College of Art. ®

Special thanks to David Levy and Geoff Hollington for their invaluable insights into the Enterprise story.