Sir, that FOREST is a threat to NATIONAL SECURITY

Australia's Army is combining tight lips with a red face, after it emerged that one of the large-scale bushfires that's hammering the surrounds of Sydney was sparked by live artillery fire.

The blaze has incidentally lit a political conflagration, with the new government working to deflect suggestions that changes in fire behaviour are driven by climate change.

Dubbed the “State Mine Fire”, the giant outbreak has burned an area of 48,000 hectares and has a circumference of more than 300 km, and is one of three ringing the Blue Mountains west of Sydney.

After a Rural Fire Service (RFS) investigation, it emerged that last Wednesday (October 16), the Army was conducting live-fire artillery practice at the Marrangaroo Army Range. The location hampered early attempts to bring the fire under control, since fire-fighters could not enter the range.

The following day, Thursday October 17, the weather helped the fires to take hold and spread at speed. The State Mine Fire ran more than 30 km, driven by high winds, to the east, while in the townships of Springwood and Winmalee, much closer to Sydney, 198 homes were destroyed by fire. 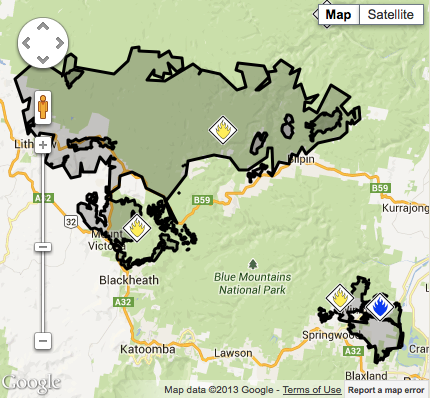 North and North-West - the State Mine Fire, sparked by artillery

The location of these three fires, along with high winds and extremely difficult terrain, meant that all towns to the east and south of the fires had been considered at risk at some time or other in the seven days since the blazes took hold. Only on October 23 and 24 did the RFS consider conditions stable enough to begin closing down its evacuation centres.

The Army announced that it would investigate the early local newspaper reports that it had bombed the bush alight. However, it has declined any further comment until that investigation is complete. RFS Commissioner Shane Fitzsimmons has, however, said that the Army has cooperated with the RFS's investigations.

None of the fires have been extinguished, but easing weather conditions mean the RFS is reasonably confident that backburning and containment lines constructed over the last week will control the blazes.

The fires have become a political hot-potato, with two government figures, the Prime Minister Tony Abbott and environment minister Greg Hunt, taking exception to any impression that changing and more severe fire-seasons might be associated with climate change.

The head of the UN's climate change negotiations, Christina Figueres, said that “the science is telling us that there are increasing heat waves in Asia, Europe, and Australia; that these will continue; that they will continue in their intensity and in their frequency”.

This was batted away by the prime minister as someone “talking through her hat”, while the environment minister told the BBC World Service he looked up Wikipedia for information about bushfires (full audio here). ®

Update: Just before this story went live, the two western fires, the State Mine Fire and the Mt York Road fire, returned to emergency level as winds pushed them northwards again.

In an unrelated incident, search and rescue teams are seeking the wreckage of a fixed wing water-bomber contracted to the RFS crashed west of Ulladulla, with NSW Police confirming the death of the pilot. ®

Nice. They went after vulnerable people and those over 60 who'd registered with Telephone Preference Service
Security8 Dec 2022 | 16

I'm the smartest guy in the room, I'm sure the message from IRS refunds is legit
Cyber-crime8 Dec 2022 | 4

Desktop Tourism It does most things well, some things right, and a few things bafflingly badly
Personal Tech8 Dec 2022 | 7

And remember CSAM scanning plan? Forget that was ever a thing
Security8 Dec 2022 | 4