Cupertino supremo gets snarky – is he pugnacious or defensive?

Comment As The Reg reported on Thursday, Microsoft communications chieftain Frank Shaw went off on Apple in a near-thousand word blog post defending his company's beleaguered Surface and Surface 2.

His fit of pique, while possibly a bit over-the-top, can be forgiven, considering that Apple CEO Tim Cook was unusually pugnacious during his keynote on Tuesday morning, rolling out the iPad Air, iPad mini with Retina display, new MacBook Pros – or would that be MacBooks Pro? – and OS X Mavericks' free upgrade.

Actually, "pugnacious" may not be the best word to apply to Cook's unusual keynote attacks on the competition. Considering some of the flak he's been getting for Apple's stock slide and alleged lack of innovation, perhaps "defensive" might be a better term.

Take, for example, Cook's assertions that Apple has a clear direction for its product line – Macs, especially – and that the competion doesn't. Although he didn't mention Steve-Ballmer-led Microsoft or any other competitors by name, the implications were clear.

"Our competition is different," he said. "They're confused. They chased after netbooks. Now they're trying to make PCs into tablets and tablets into PCs. Who knows what they will do next?" 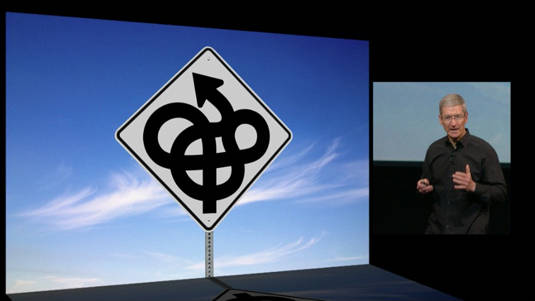 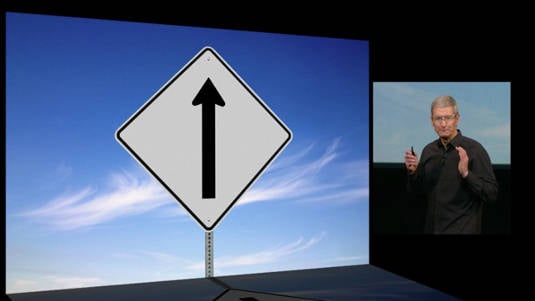 ... but Apple, on the other hand, has a well-defined path to the future

Speaking of the personal-computer market, Cook implied that Apple's competitors are less than committed. "We still believe deeply in this category, and we're not slowing down on our innovation," he said.

Hmm, Tim – and your competition doesn't and is, we're to believe?

Cook also took a moment to brag about the adoption rate of iOS 7 and get in a dig at Android and its device makers at the same time. "Nearly two-thirds of the devices are running iOS 7," he said. "Now this is tremendous – it blows away the other guys."

When speaking of the iPad, he indulged in some uncharacteristically non-Cookish gloating over comments about that breakthrough fondleslab that hit the blogosphere when it was introduced in 2010, displaying quotes of three unnamed observers who were simply – there's no way to sugarcoat it – dead wrong.

The first quote, "I can't see a need for the thing," remains unidentified, but Time's Business & Money blog identified Paul Thurrott of the technology blog Supersite for Windows as the source of "Anyone who thinks it's a game changer is a tool," and small-business tech consultant Bruce Berls as the man who blogged, "It's not going to revolutionize anything, it's not going to replace netbooks."

In response to that quote, Cook snarked, "Who remembers netbooks?"

"These amazing products are great examples of the type of innovation that only Apple could deliver," he said. "Other companies would be incredibly proud to just have one of these products."

Other companies such as Shaw's Microsoft, perhaps? ®