Warming up in the Big Bang's background radiation

Pic If you're searching for the ideal place to hold your Halloween party next Thursday, may we suggest the Pac-Man-ghost-shaped Boomerang Nebula in the constellation Centarus? 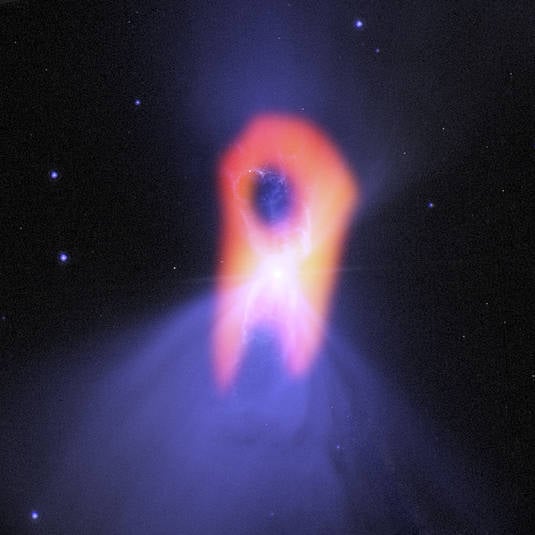 'Casper, the Friendly Ghost, the friendliest ghost you know; though grown-ups might look at him with fright,
the children all love him so!' (click to enlarge)

The Boomerang Nebula has been known for some time, but recent observations made by the Atacama Large Millimeter/submillimeter Array (ALMA) in the high desert of Chile have shed more light – or, actually, received more light – on the nebula itself, its shape, and its chilling situation, reports the National Radio Astronomy Observatory.

"What seemed like a double lobe, or 'boomerang' shape, from Earth-based optical telescopes," said Raghvendra Sahai of NASA's Jet Propulsion Laboratory, "is actually a much broader structure that is expanding rapidly into space."

Sahai is the lead author of a paper discussing the recent work done at ALMA studying the Boomerang Nebula – described as "extreme member of the class of pre-planetary nebulae" – and published in the current issue of The Astrophysical Journal.

"When astronomers looked at this object in 2003 with Hubble, they saw a very classic 'hourglass' shape," said Sahai. "Many planetary nebulae have this same double-lobe appearance, which is the result of streams of high-speed gas being jettisoned from the star. The jets then excavate holes in a surrounding cloud of gas that was ejected by the star even earlier in its lifetime as a red giant."

Single-dish millimeter wavelength telescopes, however, saw a nearly spherical formation, but ALMA's high-res capabilities were able to observe carbon monoxide molecules, which glow nicely at its submilimeter wavelengths, and see that the Boomerang Nebula does, indeed, have a dual-lobed structure in its interior, and a more-rounded cloud of gas further out.

The rapid expansion that Sahai refers to is of gas from the dying star at the core of the nebula, and is the explanation for the Boomerang's frigidity. As the gas expands, it cools in a manner "similar in principle to the way refrigerators use expanding gas to produce cold temperatures," explains the National Radio Astronomy Observatory.

Sahai and his team were able to measure the temperature of the gas in the nebula by measuring its absorbtion of the cosmic microwave background radiation, and calculate its supreme nippiness.

"This is important for the understanding of how stars die and become planetary nebulae," said Sahai. "Using ALMA, we were quite literally and figuratively able to shed new light on the death throes of a Sun-like star." ®