Ofcom: By 2017, even BUMPKINS will have superfast broadband

Ofcom's annual report on the state of Blighty's infrastructure promises "near universal" superfast broadband by 2017 with only the most gentle of regulatory nudges.

Seventy-three per cent of UK premises are already getting "superfast" broadband, with BT's Fibre to the cabinet (FTTC) available to 57 per cent of UK properties and Virgin's cables passing almost half of them, we'd be there if the companies didn't overlap so much.

Of course, BT is happily spending government cash to extend coverage, and 4G is expected to fill the gaps, making for a well-connected Britain come 2017.

We're starting to use it too, with 22 per cent of broadband connections now falling into the "superfast" category. Ofcom, and the EU, reckons this means 30Mbps download, but BDUK (the body handing government cash to BT) reckons 24Mbps – and then further watered that down to 15Mbps for 90 per cent of the time, as long as it "feels like a 15Mbps connection".

But in many rural areas, particularly those with high unemployment, anything which could handle a single video stream or a modern shopping website would be a welcome relief.

In mobile the news isn't quite so progressive. 2G and 3G networks haven't expanded significantly with operators focused on 4G deployments. Upgrades to existing networks being consolidation and rationalisation, often carried out while bolting 4G kit onto the masts.

All the operators (except Three) are committed to blanketing most of the UK with 4G by 2015, though only O2 is legally obliged to do so. If they're met the promises should see 98 per cent of the UK getting more than 2Mb/sec 4G, from multiple operators, with only Three refusing to play the game in just promising the speed without necessarily the generational change.

At that point another £150m of government cash is up for grabs, to fill the remaining blanks. One might imagine BT would be out of the running for that, but with 55Mhz of 4G spectrum in its pocket there's no government subsidy beyond the reach of BT.

Mobile coverage on Britain's roads is a cause for concern, and Ofcom plans greater research into the problem so we can come to rely on Google Maps rather than having to use offline alternatives like Nokia's HERE. 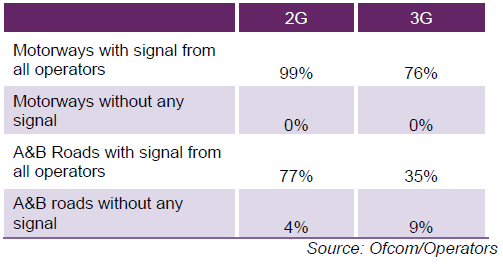 We’re also not moving to IPv6 like we should, though Ofcom notes that more ISPs have migration plans and the regulator is planning a comprehensive look at IPv6 in the UK for early next year.

In the meantime, Ofcom has updated its interactive maps of the UK for those who like pretty pictures, while those who prefer text might enjoy reading the report in full (PDF, duller than it ought to be), but in summary, the UK infrastructure is doing OK, but is not yet marvellous – three-and-a-half stars. ®