Power-sippin' EnergyCore SoCs coming to a data center near you... soon 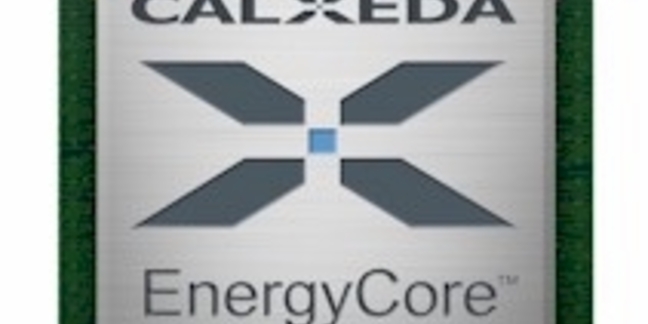 ARM server upstart Calxeda has 'fessed up about the innards of its next wave of low-power server chips – but should Intel be worried?

The "Midway" processor family, aka the ECX-2000, was announced today, and succeeds the ARM Cortex-A9-based ECX-1000 range. Calxeda has refined its system-on-a-chip (SoC) design so that it can hit higher clock rates and benefit from a big jump in cache memory; the silicon has also been successfully tested with a broader range of software, such as Ubuntu 13.10.

Each 32-bit Midway chip consists of a four-core ARM Cortex-A15 package clocked from 1.1GHz to 1.8GHz, along with a dual-core ARM Cortex-A7 processor for management services, a broad set of I/O controllers, 10Gbps Ethernet and a beefy 4MB L2 cache.

Total power consumption for the SoCs, including their network fabric links and other elements such as the server RAM memory, should range from 8W at 1.1Ghz to 12W at 1.8Ghz, we understand.

"We are finalizing the TDP [thermal design power] measurements in the next few weeks and will update our website at that time," a Calxeda spokesperson told El Reg via email.

One of the A7 cores handles system and power management and remote control capabilities, while the other can be programmed by enterprises to suit their requirements. This gives companies a greater degree of control over their chips and lets them increase the performance of base apps by offloading work to the SoC-bundled wimpy ARM core.

The Midway chips support the KVM and Xen hypervisors, and have been officially certified by Canonical as compatible with Ubuntu 13.10, and the new OpenStack Havana release. HP will make the Midway chips available in its massively multi-core "Moonshot" microserver.

Since this is an ARM chip, the system sips power rather than chugs it; an ECX-2000-equipped server will probably draw between 10W and 20W, including memory and fans and so on, we reckon. For companies that buy chips in the thousands, such as Facebook whose supply czar Frank Frankovsky recently took a board role at Calxeda, the power differences are beguiling.

The chips are due to be sampled this year with beta systems shipping just in time for Christmas, and general availability projected for some time during the first half of next year.

Intel has been watching the rise of ARM for some years now and continues to say that the workloads will never comprise more than a small percentage of the total data center market.

That hasn't stopped Chipzilla trying to take on the burgeoning ARM ecosystem, mind, and this year it refreshed its Atom range to take on the threat posed by the power-sipping ARM horde.

Now Calxeda is comparing its ECX-2000 with the new Intel Avotons and it's not pretty: the 9W Avoton C2530 lacks a native fabric switch, has no management engine, and only has a 2MB cache.

"None of the Avoton SKUs have the 10Gb Network, Fleet Fabric switch, or management and offload Fleet Engines that we've based our offering on, so we picked the part that was the closest to 'apples to apples' with respect to anything else," a Calxeda spokesman told us via email.

For now Intel is able to field low-power 64-bit chips, while Calxeda can only speak hopefully of the 64-bit Cortex-A57-based "Sarita" platform, which should come along in late 2014 – at which point the community will be better able to assess the promises of ARM versus the realities of Intel. ®