All the big dogs want to bark on our cloudy porch, says Nasuni

They quite literally need to think outside the box, apparently

Cloud storage gateways or controllers are conceptually on-premise boxes that receive data to be sent up to the cloud and tell the cloud storage of choice to retrieve some data. Nasuni - which provides a caching file and block-level access gateway - makes a point of annually rating cloud storage service providers and telling its users which ones are the most reliable and best-performing.

In 2012 Nirvanix was in the rated suppliers but this year Nasuni ejected it – a prescient decision as Nirvanix subsequently collapsed. It claims none of its users have ever lost any data pumped up to the cloud through Nasuni’s front-end system.

The latest Nasuni filers include:

Cloud storage gateway in the cloud

The VM in the cloud is for mobile device users so they can connect to a global fileshare. Think of the Nasuni gateway as a caching storage array controller with back-end storage which happens to be in the cloud. That controller can be a VM and use the host server’s storage for caching its data. With a mobile user on their travels there is no local caching controller so it is logical to use one in the cloud.

The SSD boxes are more than twice as fast as the disk ones. HA kit ensures data is available when there is a hardware failure and enables non-disruptive software upgrades.

Here's a Nasuni table listing various aspects of the boxes, such as their local cache size ...

... and here's a chart of their relative performance: 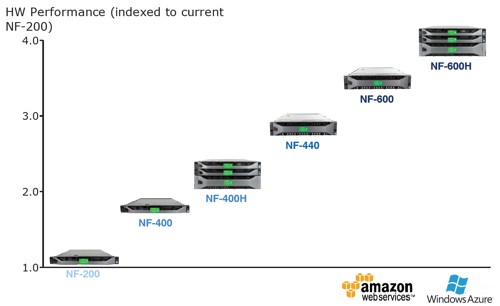 "Our customers have been telling us that they want to put Nasuni in their corporate data center and, with SSD and HA, they can do so with confidence," he says. "Also, with the addition of the cloud-based virtual Filer, we’ve also given corporate IT new options for their mobile employees to connect to the global fileshare, plus the ability to vastly improve performance for their cloud-based applications."

He summed up the new range and what it meant:

The new platform release spans a wide range of workloads: from heavy-duty data center applications that are handled by the new SSD-Based Nasuni Filers to very light weight virtual machines that can now run directly in Amazon's EC2 or Azure. This opens completely new possibilities for disaster recovery as customers can shift the location from which they have access to their storage.

Competitors are trying to achieve the same capability, it seems: "All of the big guys (EMC ViPR) are chasing this technical ideal - being able to dynamically move storage controllers from physical to the cloud and vice versa. They can't do it today because the data and the controller are stuck in the same box. We do it because our controller heads (Nasuni Filer) can move while the data stays in the same place: with our service in the cloud. All of these machine migration is orchestrated by the Nasuni Management Console which can deactivate a Nasuni Filer in a physical location and move the same logical instance to Amazon or Microsoft."