Win XP? Your PLAGUE risk is SIX times that of Win 8 - NOW

UK-based Windows XP users were six more likely to actually be infected than their counterparts who use more recent versions of Windows, according to figures from Microsoft.

The company is likely trying to highlight the infection rates of the 12-year-old OS as a way to get customers to upgrade. It says that 9.1 of 1,000 XP (SP3) boxes scanned - which is just under one per cent - had been found to be infected.

The software giant's latest annual "Security Intelligence Report" reports that, on average, 17 per cent of computers worldwide encountered malware during the first half of 2013. 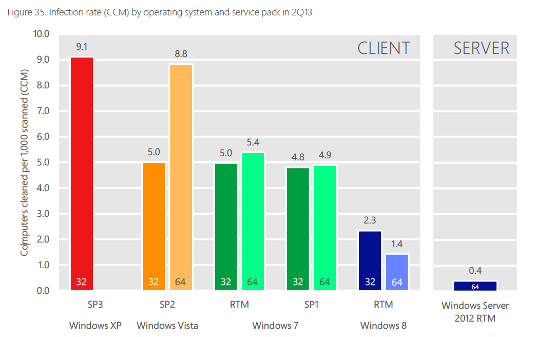 The Microsoft Security Intelligence Report takes data from over one billion sources across the Windows landscape – data was drawn from Redmond real estate such as its Malicious Software Removal Tool, Exchange Online, Windows Defender and more (see page 134) – providing an overview into the threat landscape across Windows boxes around the world. The information was collected during the first six months of 2013.

"Overall, however, vulnerability disclosures remain significantly lower than they were prior to 2009, when totals of 3,500 disclosures or more per half-year period were not uncommon."

Microsoft doesn't provide a reason but El Reg's security desk suspects that some combination of improved security practices among vendors and the growth in the exploit marketplaces (which naturally result in lower vulnerability disclosures) is behind the change.

Redmond is urging laggard Win XP users to upgrade their machines before security updates for the OS end on 8 April 2014. ®