Australia famously banned Huawei not long after Barack Obama and his entourage visited the nation in 2010. The ban is thought to have come after US intelligence authorities explained to Australia why the home of the free isn't keen on Huawei. Once Australia learned why, it slammed the door on Huawei's bid to build the NBN.

The NBN won't be a part of Australia's secure communications networks but will, as the nation's public data backbone, carry all manner of traffic. Excluding Huawei from providing so much as a single four-port switch was therefore a powerful statement of Australia's discomfort with the Chinese vendor.

Huawei's response has been a charm offensive. It has sponsored a local football team, fired up various charitable initiatives and brought high-ranking execs down under to deliver “headland” speeches. The company also appointed former Liberal party ministers to its board, a decision seen as giving it more clout with the Australia's Liberal/National government. 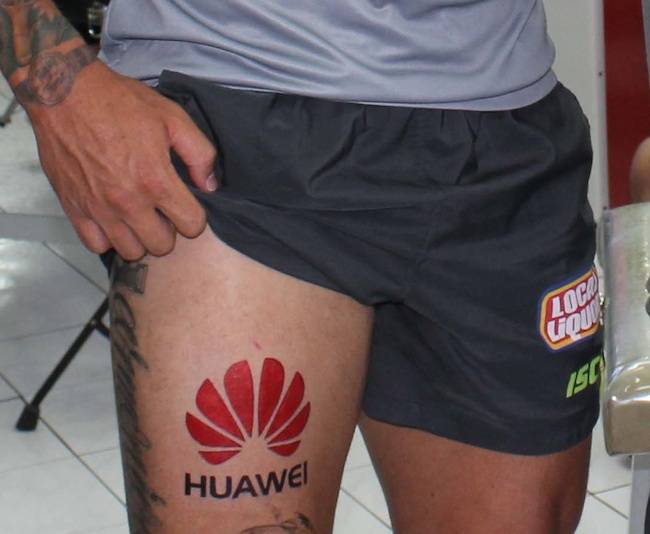 Huawei's charm offensive included the pic above, an April 1 jape depicting a footballer at sponsored club the Canberra Raiders having the Huawei logo applied as a tattoo. The footballer in question subsequently became embroiled in a scandal regarding performance-enhancing drugs

If Murdoch organ The Australian is to be believed, and on matters concerning the Liberal party it often has an inside line, the new government has read national security assessments about Huawei and decided to keep the previous government's Huawei ban in place. The paper's paywalled report says Abbott has decided to keep the ban and has written to opposition leader Bill Shorten to confirm the ban stands. Putting it on letterhead makes it official.

Given the new government is overturning all sorts of policies the previous government ran with, this lack of reversal is significant.

Huawaei is yet to issue its usual “we're awfully nice, wouldn't hurt a fly and therefore awfully disappointed” statement. If it does more than that, we'll let you know. ®