"I'm 903 years old and I'm the man who is gonna save your lives and all 6 billion people on the planet below. You got a problem with that? "

That fond idea of dystopic novelists, that only the very rich and the very powerful will get to enjoy the fruits of this new spacefaring life, is a very real fear when it's billionaires and corporations behind the latest push into the universe, but it's one Tumlinson dismisses.

Elysium - the latest vision of a space playground for the rich and famous. Credit: Sony Pictures

"One of our slogans is that nobody stays until somebody pays," he said. "Now that could be the taxpayers so that a bunch of elite government employees can go frolic around in space or we can find customers. If it turns out that those customers begin by being Wall Street people then so be it, that'll be the start."

"You see, one of my favourite things to do with rich people is to get them to give us their money - it's very important!" he joked.

"The whole point of rich people is to have them spending their money doing things so that money goes to somebody who allowed them to do those things ... that's basic economics. If they're paying us to be able to live in a habitat in space that then creates an entire economy [then] there are people who are working in that habitat, there are things that we're learning at their expense for the development cost that we can then begin to create more and more of and lower the cost overall.

"So we may end up with some rich people going up first, but that'll be fixed over time. I think you start with the wealthy and you work your way down."

The other theory is that if it's not the rich and powerful, it will be the highly intelligent and physically fit that get all the seats on the bus to space, but Tumlinson reckons people would be surprised at the kinds of things these astronauts will have to do every day.

"You want someone on a mission who knows how to use a needle and thread as well as a computer programmer as well as a biotechnician as well as a sanitation engineer who understands how to fix toilets because these are the kinds of things you're going to encounter when you're out there," Tumlinson pointed out.

For the very first people that go out there, Tumlinson is willing to go even further than that - he reckons that old-age pensioners could be the first of the human race to head for the stars. 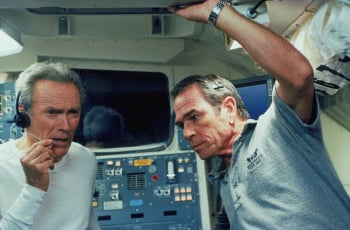 OK, Space Cowboys is a terrible movie, but it's hard to argue with

the idea of guys like these in space. Credit: Warner Bros

"Right now, what we do when somebody hits about 70 years old, we confine them into this multi-billion dollar one-way march towards death, which are senior homes and things like that and all of their usefulness to society is sucked out of them and they have nothing to do but wait for death," he said.

Tumlinson reckons this is a waste of any skilled older people who still have the physical ability to withstand a journey into space.

"Wouldn't it be interesting if we had a situation where a subset of our senior citizens were given the chance to go to a place like Mars, to be the pioneers and do the kinds of things that are required to begin preparing the way for their great-grandchildren to come and call it a new home?" he suggested.

It's a sentiment Doctor Who would likely agree with. Despite the general youth (and incidental good looks) of most of his companions, he hasn't been above taking a few different age groups aboard the Tardis. In fact, the secondary character of old-age pensioner Wilfred Mott had arguably one of the greatest impacts of any side cast member when he triggered the regeneration of the Doctor from his tenth to eleventh incarnation (The End of Time).

Travel in time is one thing but it seems us humans have got some ways to go before we've mastered that other staple of Dr. Who - getting around in space. ®