Pontiff-verified; but the Three Kings will need IR goggles this time 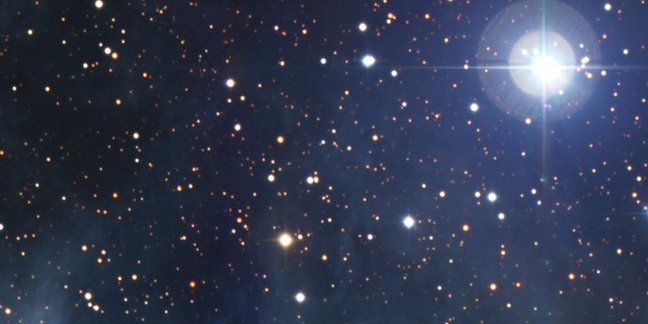 Good news this week for relatively youthful watchers of the skies: top astronomers predict that within 50 years it's almost certain that a star in our galaxy will go supernova - that is, explode with stupendous violence - briefly creating a glowing beacon visible from one end of the Milky Way to another.

There's a catch, of course. While the chance of a visible supernova in the coming five decades is indeed close to 100 per cent, it seems that it will in all likelihood only be visible in the infrared as opposed to the homely visual spectrum detectable by the naked human eye.

Even though the coming supernova may only be viewable by suitably equipped astronomers - and perhaps soldiers or other people of the future using the right kinds of night-vision headset or scope - boffins are excited at what could be learned.

“Every few days, we have the chance to observe supernovae happening outside of our galaxy,” explains budding boffin Scott Adams, working on his PhD at Ohio State uni. Adams was part of the team which has come up with the new supernova forecast.

“But there’s only so much you can learn from those, whereas a galactic supernova would show us so much more," he goes on. "Our neutrino detectors and gravitational wave detectors are only sensitive enough to take measurements inside our galaxy, where we believe that a supernova happens only once or twice a century.”

As regular readers of the Register's astronomy coverage will know, a supernova occurs when a particularly large star runs low on fuel to burn. At this point the terrific continual blast of energy which holds the outer parts of the star away from the core ceases, and the mighty body collapses violently in on itself - which causes it to then explode with galaxy-shaking force.

Sadly, Adams and his fellow sky-probing scientists believe that the next star to go fully supernova here in our home lenticular galaxy - the Milky Way - is only about "20-50 per cent likely" to be viewable by the naked eye, with an increased chance for southern hemisphere residents as they can see more of the galactic disc. But that's still better than no chance at all.

There's a still lower chance - just 5 per cent in the next half-century - of a proper, really bright visual supernova of the sort that appeared in 1604. That one outshone all the stars in the sky for a time, causing great excitement for eminent old-time astroboffin Johannes Kepler. He theorised, as have many since, that a similar event must have caused the mystical bright star which - according to the Bible - heralded the birth of the infant Jesus.

That viewpoint has lately received authoritative backing from no less an authority than the Pope. Benedict XVI, formerly aka Cardinal Ratzinger, advanced the idea that the Star of Bethlehem - which guided the Three Kings on their way to hand over their gold, frankincense and myrrh - was a supernova in a book about Jesus last year.

So there's at least a small chance of a proper, Jesus-grade Star of Wonder in the next few decades - surely reason enough to keep watching the skies, even if one is not tooled up with an infrared scope and accompanying neutrino detectors.

There's more on the business of supernova spotting from Ohio State here, and Adams and his colleagues' new forecast can be seen here ahead of publication in the Astrophysical Journal. ®