Teardown According to the teardown fanatics at iFixit, Apple's new iPad Air is twice as easy to repair as Microsoft's equally new Surface 2 – which received an as-low-as-you-can-go repairability rating of 1 out of a possible 10.

Actually, it would be more accurate to say that the iPad Air is only one small step away from being as fiendishly difficult to repair as the Surface 2. The low, low repairability score of 2 that iFixit assigned to Apple's slimmed-down fondleslab after their teardown is certainly nothing to be proud of.

As iFixit wrote in an email, "The changes to the new iPad are bad for repairability, but not quite bad enough to halve its score from 2 to 1. It was an extremely close call, though. We wrestled with the decision for quite a long time before reaching our conclusion."

Copious amounts of adhesive was the villain in the teardown of the Surface 2, and that gunk makes its return in the iPad Air. Unlike the Surface 2, however, iFixit didn't have to break out their Chicago Heat Gun to loosen the gluey grip securing the iPad Air's case; their microwaveable iOpener heat pad was sufficient – along with the help of a handful of guitar picks. 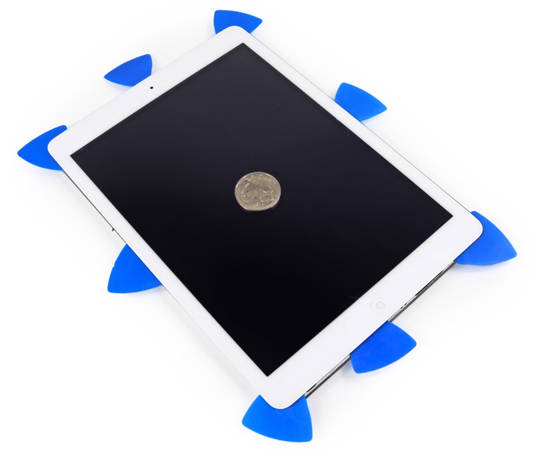 After popping open the case and freeing the 2048-by-1536 pixel, 264 pixels-per-inch Retina display, the two-cell lithium-polymer battery was revealed. That battery, iFixit notes, provides 32.9Whr of juice, significantly less than its predecessor's 43Whr three-cell "behemoth." Apple's tech specs, by the way, report the capacity to be 32.4Whr.

Despite this large drop in capacity, however, Apple claims that the iPad Air's enhanced efficiency will still allow for "up to 10 hours of surfing the web on Wi-Fi, watching video, or listening to music." 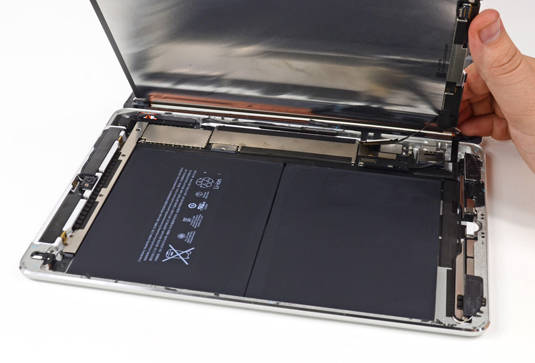 The amount of glue holding down the battery caused the iPad Air's Australian disassembler, iFixit reports, to send them "one, last, coherent message before strings of expletives" when attempting to remove the battery: "It's the worst battery ever," he said.

Fortunately, the iPad Air's logic board is not glued down, and removing it allowed iFixit and their pals at Chipworks to identify the chippery powering Apple's latest slab of shiny-shiny. 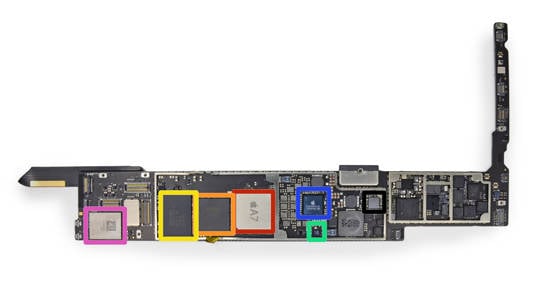 Interestingly, the A7 chip in the iPad Air, outlined in red and sitting next to 1GB of Elpida low-power DDR3 SDRAM outlined in orange, has a different ID number than does the A7 in the iPhone 5s – the Air's A7 is marked APL5698, while the A7 in the 5s is labeled APL0698.

Chipworks surmises that the renaming of the A7 is due to the fact that it's reported to run at 1.4GHz; the A7 in the iPhone 5s is said to run at 1.3GHz. "It's quite a hefty heat sink on the chip," they write, "so it's definitely running warmer." Alternatively, they say, the new designation could be due to a different pin-out needed to talk with the Elpida memory.

We'll ask Apple, and we're sure they'll tell us. That was a joke, by the way.

Other chips of interest include 16GB of Toshiba NAND Flash (yellow) and Apple's 338S1116 Cirrus Audio Codec (black), which iFixit says they also found in the iPhone 5c. For a full listing of all the chips, check out iFixit's teardown, which also includes 55 photos detailing the entire process. 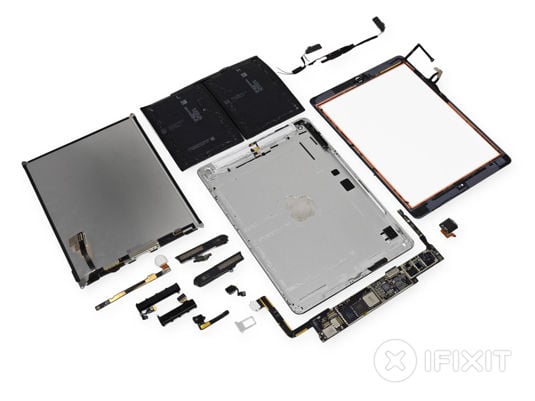 If field-stripping an M4 carbine were this difficult, pity the poor infantryman (click to enlarge)

And a painful process it was. The front panel is glued down, which increases the chances of cracking it when you attempt to remove it, for example, and the display is fastened to the front panel with foam sticky tape, which also boost the likelihood of inadvertent shattering upon removal.

All in all, the iPad Air is a bear to take apart for repair – but at least it's not a Microsoft Surface 2. ®