Have you reinstalled Windows yet? No, I just want to PRINT THIS DAMN PAGE

It's the only language they understand!

Something for the Weekend, Sir? Unable to print.

Well, thanks, but I think I could have guessed that by myself based on the simple evidence that the printer is still in Sleep mode and output tray is ominously empty. Oh well, I have a bit of time spare and I’m in need of a laugh so let’s run the Troubleshooter.

Good advice. Who knows, one of my five technophobe co-workers might have come in extra early that day, located the Ethernet cable at the back of the printer and, on a whim and without knowing what it was, pulled it out. This co-worker would then have covered his tracks, wiped his fingerprints, dissolved a body in a bathtub and sneaked home before returning nonchalantly at 9am after everyone else.

But no, the printer is still connected. I knew this already because I successfully sent a job to it earlier from my laptop. My co-worker’s desktop computer, however, doesn’t want to know. It, too, is connected and happily online but is inexplicably on non-speaking terms with the printer since that morning.

In this office, I am just one of the gang, not IT support. However, I understand that printing problems are frustrating for mere mortals and so I’m happy to help. I know a quite a bit about printing and am by nature very patient. 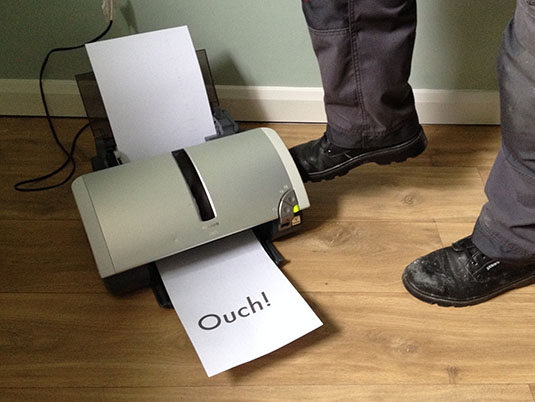 It really is the only language they understand

This is the same colleague who got in a tizzy the other day when his mouse’s right button got stuck. I told him to throw the mouse away and take a new one from the cupboard. He was shocked at my cavalier attitude and insisted on telling me all the things he’d tried to get it to work. “Just chuck it in the bin,” I repeated. “No need to get riled about it.”

This advice would have gone down well at one of my clients' offices where fully working mice come at a premium. At that place, whoever arrives first in the morning habitually nicks the best mouse in the room; whoever turns up last has to make do using cursor keys.

It reminded me of the early days of working at Ziff-Davis in the 1990s. For two weeks after we moved into swanky Thames-side offices, there were fewer chairs than desks, and fewer desks than staff. Thankfully, being nice guys, we did not fight over the chairs, nor descend to that sad, private hell of painting one’s name on the back of a favourite chair with three pots of Tipp-Ex.

When I mentioned the lack of decent mice to an IT manager at my client’s office, he walked me to a cupboard and threw open the doors to reveal about 50 spare mice, all in pristine shrinkwrapped boxes. How many did I need, he asked dryly.

So, me and tech: we’re friends. I can handle silly things like printers that play up from time to time.

Have you tried changing the port?

Ho ho, here we go, the printing Troubleshooter has shifted straight into stupid-question mode. I click on No.

Have you tried re-installing the drivers?

No, not yet. I probably will later but let’s see if the Troubleshooter can determine why this computer could print yesterday but not today.

Have you tried printing to another printer?

No, because this would involve installing more drivers. Come on, Troubleshooter, give me a quick and simple solution.

Have you tried re-installing Windows?

Oh for crying out loud.

Have you tried recompiling the comms driver code?

Have you tried taking the M62 when it’s snowing?

Have you tried the chef’s special?

Have you tried dancing naked in the moonlight?

OK, I get the hint. I download the drivers and install them. Ten minutes and some virtual fisticuffs with Windows Firewall later, my colleague can print again. I surmise that Windows Update did something yesterday to make the printing stop – you know, one of those Critical Updates To Prevent User From Printing. And so I return to my laptop, which is in every way perfect, well-maintained, free of printer driver hassles and doesn’t smell at all of cat’s piss. 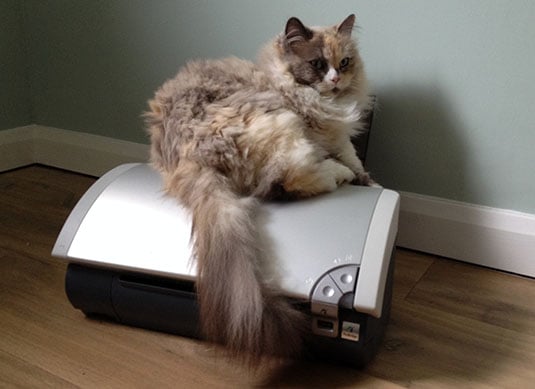 Unable to print. The Yellow Ink Cartridge may be out of ink.

What… it *may* be out of ink? The printer doesn’t know for sure? It’s just a bit of ol’ inkjet intuition? No worries, I’ll replace the yellow cartridge.

After five minutes of clicking and whirring, there’s still nothing printing but an icon in the tray is flashing at me.

That’s logical I suppose but I’m not sure why I need to tell the printer to continue. Call me impetuous but I rather imagined that the printer would have guessed that I wanted to print by the very fact that I tried printing to it.

More clicking and whirring, followed by sudden stillness. No printout.

Unable to print. The Black Ink Cartridge may be out of ink.

Well, OK, but it would have been nice if you’d bothered to tell me this when I was replacing the yellow cartridge. One return trip to the stationery cupboard and lots of clicking and whirring later…

Yes, yes, come on, come on. I’m starting to run late for a meeting and should have left the office a short while ago.

Unable to print. The Cyan Ink Cartridge may be out of ink.

Unable to print. The Magenta Ink Cartridge may be out of ink.

Christ. Cart out, cart in. Print you stupid bastard.

FFS, just print it! You’re a printer, so print! That’s what you’re supposed to do, you vicious bastard! Print it now! I’ll count to three! One… two… three…

Unable to print. The Photo Black Ink Cartridge may be out of ink. Right, that’s it. Never has an inkjet come so close to a damn good thrashing. ®

Alistair Dabbs is a freelance technology tart, juggling IT journalism, editorial training and digital publishing. He remembers even worse days of glitchy printer drivers in the pre-USB era in which an average parallel cable was so thick and inflexible that you could padlock your bicycle with it, yet with fat connectors that popped out by themselves if you so much as shifted the printer across the table by one millimetre.

On-Call Even with instructions staring them in the face, this genius couldn't get it right
Software27 Jan 2023 | 31

Welcome to the real world, kids. And for the rest of us, a future at which Meta is gulp! – better at large-scale analytics
Databases27 Jan 2023 | 4